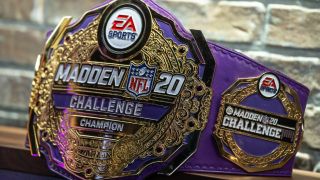 The Super Bowl - and NFL season - may be long over, but Madden 20 tips mean you can still celebrate winning the big one regardless of your feelings on the Kansas City Chiefs. Madden 20 is much improved this year, particularly in areas such as the run-pass option, and mission structure found within Ultimate Team. Already looking forward to next season? Then check out your Madden 21 features wishlist. Still enjoying the current game? Crack on with our Madden 20 tips rundown.

Face of the Franchise lets you restart

Devin Wade’s Longshot story is gone, and the more freeform Face of the Franchise mode is in. In Madden 20 story mode, you create your own quarterback, play through the college playoff series, perform at the NFL combine, and are invited to draft day. How soon you come off the board is partly in your hands. An early exit from the college playoffs hurts your draft stock, as does a sloppy performance in Indianapolis for the combine.

If being selected early in the draft is important to you – especially as it scores an achievement/trophy – you can guarantee becoming the first overall pick. To do you, you must win the National Championship and impress scouts with a flawless combine workout. The combine is 24 passing plays and the game lets you know when you’ve messed any of these up, so if you’re really pushing for that number one spot on draft day, don’t hesitate to scrub your save and try again.

Check your phone in franchise mode

Franchise mode doesn’t get a lot of love this year - no surprises there - but one minor new feature that is pretty cool is its increased social aspect. Each week, your player or coach receives text messages from different people in the NFL universe. It may be a beat reporter for the local paper, or a rival player, or even one of your own teammates. They ask for favors, taunt you, give you interviews, and how you reply determines where XP bonuses go and what goals you have for the game ahead. Make sure to interact with these, because to skip them often means losing free XP boosts or other opportunities to more quickly progress your players. In brief, keep your ringer on.

Know and trigger your X-Factors

X-Factors are this year’s biggest addition. 20 of these skills are given to the league’s 50 most dominant players, and can be activated multiple times during any game in any mode. To get the most out of these boons, feed your superstars opportunities early. For example, Odell Beckham needs three catches of 20+ yards to activate his RAC ‘Em Up ability (increased success rate for RAC catches versus single coverage), so you should be script your drives early and often, enabling him to hit that milestone. Once Beckham hits it, he stays in the “zone” until a defender forces an incompletion. Just like in real life, these X-Factor players have the chance to dominate all four quarters, so get them involved fast.

If you’re playing Franchise as a coach, the draft is one of the most important moments of every season. If you want to best build for the future, be sure to track your draftees’ progression potential in the roster menu. Clicking on any player reveals the rate at which their skills will improve and there are four possibilities: normal, star, superstar, and X-Factor. Any incoming rookies need to first play 500 snaps (roughly half the season for a starter with six-minute quarters) before their potential is revealed, but once it is you have a clearer idea of which new players have breakout ability and which may have been draft busts.

Get trendy with the run-pass option

For online play, this is the most critical of our Madden 20 tips. The run-pass option has been the league’s favorite toy ever since the Eagles ran it all the way to a Super Bowl victory two seasons ago. RPO plays are in Madden for the first time this year, and as tricky as they can be for defenses, you can be right there with them without enough practice. Head to the Skills Trainer under the Exhibition menu and find the Run Concepts playbook. Three new drills are available that familiarize you with the RPO and how to use it effectively with intelligent pre-snap reads and lightning-quick reaction times once the ball is snapped. If you used this method to master the QB option from a few years ago, you already know how practice really does make perfect.

As Ultimate Team grows more with every season, the amount of menus, modes, and currencies can be daunting for new players. If you’ve been avoiding MUT due to its intimidating array of routes and options, never really sure if you’re progressing correctly, there’s no need to worry anymore. Madden 20 adds Missions, a guided approach to the many challenge trees of Ultimate Team. It’s the first page you see when starting a new team, and should be considered your HQ  for anything you’re working on while building your fantasy roster of past legends and current stars.

Skip to three-star challenges in MUT

One more key MUT tip to finish. Now that you’re no longer scared off by its various challenges, take it one step further and skip to the “hard” challenges early on. If you’ve played MUT before, you know the challenges begin quite simple: “Run for 10 yards,” “Complete two passes,” “Throw a touchdown from the goalline.” Many challenges have three tiers broken up by difficulty, but because the objectives are so simple, you can save time and earn rewards much faster by cutting the line and choosing the three-star challenges immediately – rather than playing the same challenge on easy, then medium, then hard. Eventually they get legitimately harder, but you can play several hours of “hard” level content before most Madden 20 players would agree with the designation.

Watch the clock in no-huddle

In previous years, a great way to race back into a game when losing - or infuriate an opponent online - was to master your audibles and utilise a hurry-up offense, saving time by skipping the play-calling screen. This short-cut still works, but you need to play it more carefully as the clock now takes into account the time it'd take in real life for your players to get back into position. Complete a long pass downfield and you can hold triangle (on PS4) to skip the huddle, but lose 10-15 seconds as everyone gets back to the line. Inside the final minute, those lost seconds are critical - so don't forget to run out of bounds and stop the clock as often as possible.

Madden 20 is out now. Wondering which superstars to use now you have all these tips? Then you need our guide to Madden 20 ratings.