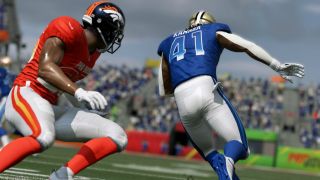 There’s no let-up in the NFL calendar: right now, 31 other teams are on their way to trying to emulate this year’s Kansas City Chiefs in lifting the Lombardi trophy, and it’s the same where Madden 21 features are concerned. The game remains months away, but with the Super Bowl done and dusted fans across the States - indeed the world - have already compiled a colossal wishlist for next year’s Gridiron giant. Have no time to be cycling through social media and other forums in order to take in every last suggestion? Fear not, GamesRadar+ has done the work for you by curating this ultimate fan-made Madden 21 features wishlist.

Madden 20’s marquee addition was a mechanic called Superstar X-Factors: specific individual traits triggered by completing a succession of in-game actions, which made the likes of Pat Mahomes and Tom Brady truly feel unique. However, there’s a feeling among the community that it overpowered these players to an almost arcade degree - not good for what’s supposed to be a sim football game.

“I feel like attributes alone should be able to accurately depict a player's specific skill set,” writes tosstamer1 on the official EA forums. “Russell Wilson has 86 speed and Kyler Murray has 92 speed. Yet Wilson can run significantly faster than Murray because he has the Escape Artist X-Factor, and Murray doesn't. That makes no sense.” While he’d like that X-Factor removed completely, tosstamer1 does feel that there are traits which can be developed further. “Certain abilities don't make the players OP. Route Apprentice, No-Look Deadeye, and Blitz Radar are cool because they don't make the gameplay feel like an arcade game.”

2. Face of the Franchise plastic surgery

Face of the Franchise, in which you graduated a young prospect from college to NFL, had some standout moments - but much like predecessor Long Shot, it was over too quickly. Patient-Scale on Reddit shares some simple ways to expand it, even if the overall experience still has to have a natural beginning and end.

An unnamed poster chimes in further: “When you jump into the NFL, don’t play the long boring parts – have three or four chances per game at an awesome moment or a star play. How well you do in those moments should put you in contention for awards like Rookie Of The Year.”

This is almost certainly one that will have to wait until PS5, but it’s definitely a valid criticism. The physics found in Madden 20 are robust, and weighty, and an improvement on previous editions, but there is one area where it could do with a big upgrade. Tackling. More specifically: the variety of tackling animations.

“Madden NEEDS a new physics game engine,” writes Chris at spottis.com. “We are sick and tired of the animation-based tackling system. I see the same tackling animations 15 times a game. Backbreaker had a better physics engine 10 years ago, so Madden’s is inexcusable [by comparison]. The technology is there. Give us what we want, we pay for it.”

Just look at this mock-up, from Deuce Douglas on Twitter, inspired by the Super Bowl. How could anyone not want this added immediately?

Better O-Line and D-Line play is an annual Madden request, and not one we wish to gloss over (run blocking, for instance, is solid in Madden 20) - but between the numbers it’s pass coverage which could really do with a significant re-tune.

“Defenders in man-to-man still get wrecked too easily, too often,” writes TonyBake on Operation Sports. “I still see corners just turning in the wrong direction to cover routes by receivers. The AI still doesn't break on the ball when in zone until it’s literally already in the receiver's hands. And safeties still drop back way too deep, even if no one is going deep. EA improved it a bunch [with patches] compared to how the game was when it first came out – but sorry, the pass coverage is still garbage.”

Franchise mode continues to improve year upon year, even if it still falls short of its PS2 heyday. One way to bridge that gap would be to reconfigure how injuries work. I’ll let Cowboy_kmoney from Operation Sports explain further:

“The current injury system is not realistic and is not football. I would love to see a system put in that makes injuries matter. Players coming back from bad injuries [should suffer] a hit in ratings. We need real-time injuries: a star RB is out with a torn ACL/PCL while in his contract year, but he’s been putting up big numbers over the last three years. The owner really likes this running back. [So do you stay loyal or cut him, knowing that his numbers may drop upon return?] It's these kinds of decisions and hard choices [that would really improve franchise].