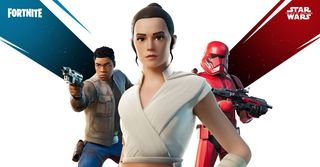 One of the world's biggest-ever crossover events – Fortnite x Star Wars: The Rise of Skywalker – is over.

As we revealed last week, today, December 14, 2019, LucasFilms released a new, exclusive peek at Star Wars: The Rise of Skywalker and the only place you could watch it was by popping along to Fortnite's Risky Reels, the game's own in-game, drive-in movie theatre.

Not everything went entirely to plan, though. Many players, myself included, had trouble signing in as Fortnite's server struggled to match demand, so consequently, the event was a little delayed. Eventually, however, those familiar strings kicked in as TIE Fighters appeared in hot pursuit of the Millennium Falcon. When it landed, The Game Awards host Geoff Keighley appeared via hologram and players were given the chance to choose which clip they wanted to see.

The teaser itself? Introduced by director J.J. Abrams – who had had a Fortnite avatar fashioned in his likeness – the scene was surprisingly, maybe even disappointingly, brief and showed off an action-heavy sequence in which Finn, Poe, and Rey sneak onto an enemy base, with Rey flexing her Jedi tricks to get past some pesky Stormtroopers. And… well, that was pretty much it, actually. After that, players got to choose a lightsaber: cue chaos.

Here's the teaser, as captured by GamesRadar+'s very own J.J.:

Also revealed were a number of new Fortnite-flavoured skins – Rey, Finn, and the unmistakable Stormtrooper outfit – and all attendees were gifted with a free TIE Whisper glider (thanks, Kotaku) as a thank you for taking part.

Star Wars: The Rise Of Skywalker will be available to watch in real-life cinemas from December 19, 2019, in the UK, and December 20 for fans in the US.

Fortnite is back and it's not just Season 11 this time – it's a whole new chapter has dawned for Epic's battle royale. From fresh skins, new locations, water-based fun, and more, there's plenty to get excited about, although the biggest change is that there's a brand new Fortnite map, which features 13 new locations, including all-new water-based activities including swimming, fishing, and showing off in one of the Fortnite motorboats with mounted guns on it.

Need to catch up? Here's everything you need to know about Fortnite Chapter 2 Season 1.