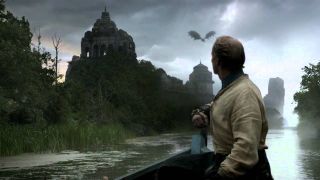 HBO's House of the Dragon is on track to premiere in 2022. The Game of Thrones prequel is based on author George R.R. Martin's Fire & Blood novel, an account of Targaryen family history stretching back 300 years before the events of the main A Song of Ice and Fire series.

In an interview with Deadline, HBO President of Programming Casey Bloys was asked about the Game of Thrones prequel and when it might debut. "My guess is sometime in 2022," he replied before adding that, "they are starting writing."

The other Game of Thrones prequel, which was set to star Naomi Watts and had already filmed its pilot episode, was canceled in October. HBO ordered House of the Dragon straight to series shortly thereafter.

Bloys also spoke on the decision not to give a series order to the other Game of Thrones prequel, which would've focused on the origins of the White Walkers and their undead ruler, the Night King.

"One of the things I think Jane [Goldman] took on beautifully, which was a challenge, there was a lot more role creation because she set hers 8,000 years before [Game of Thrones], so it required a lot more. That is a big swing. One of the things about House of Dragons, there is a text, there is a book so that made it a little bit more of a road map for a series order."

House of the Dragon will explore the Targaryen dynasty's rise after founding King's Landing and eventual fall after the civil war called the Dance of the Dragons. George R.R. Martin and Ryan Condal co-created the series and will serve as showrunners along with Miguel Sapochnik, who directed some of Game of Thrones' most pivotal episodes, including "Hardhome" and "Battle of the Bastards."

Since we aren't likely to see House of the Dragon for a couple of years, feel free to get hyped for the best new TV shows coming in 2020.