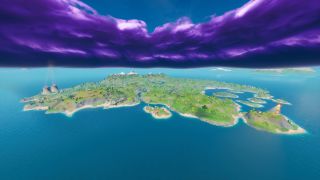 Update: The map leak turned out to be a hoax, as confirmed by the person behind the images that appeared online. In a video posted on Reddit explaining the reasoning behind the faked images, KinaKingy revealed that the map and trailer stills were all part of a "silly experiment." The video also shows how the images were created.

A new Fortnite leak has surfaced online that may reveal the new map coming to Fortnite Chapter 2 Season 2. The "leaked images" were first pointed out by YouTuber iOllek. As with any leak this could very well be fake, but there's already some debate surrounding whether these images are the real deal or not.

A possible leak of the upcoming Season 2 cinematic + map was posted on 4Chan. The pictures are super blurry, but that's nothing new when it comes to 4Chan leaks (lol).In my opinion, the pictures are faked, but there is a chance that they are real.(via @iOllekOW & @FortniteBR) pic.twitter.com/U524dVgD4qJanuary 26, 2020

The blurry leaked image shows the current Fortnite map introduced in Fortnite Chapter 2 Season 1 with a few alterations. The biggest difference shows a change to Steamy Stacks - one of the most notable new areas on the Battle Royale landscape. Steamy Stacks, the big power plant in the north-east corner of the map, appears to have blown and purple smoke now clouds over the plant.

Slurpy Swamp also appears to be covered in a sea of Slurpy blue, which might suggest something has happened to the Slurp Juice factory and the beverage may have overspilled across the entire area.

Blurry stills also surfaced in the leak which claim to be from an upcoming trailer and appear to show Fortnite characters in Season 1 skins looking pretty concerned about something, with a purple haze covering the images. Of course this is just conjecture, but if these images are legitimate and the map is real, you could naturally link the the purple colour in the stills with whatever may have happened at Steamy Stacks to cause the purple fog.

The current season has been running since October last year, making it one of the longest running seasons in Fortnite. It was recently delayed once again after Epic posted the news that the next 11.50 up would be moving Fortnite to Unreal Engine's Chaos physics system.

While the blurry images might not be anything at all, the changes do seem to go in line with changes to maps in the past. Usually between seasons, Epic tends to make changes to current areas that tie into events, so it's not such an outlandish concept that some event alters two prominent areas on the map like Steamy Stacks or Slurpy Swamps.

Getting stuck into the Battle Royale yourself? Here are all the Fortnite tips you need to get that coveted Victory Royale.

After contributing to Gamesradar+ for a few months, I somehow bagged myself my dream job as a full-time Staff Writer. You'll see all sorts of articles from me here, including news, reviews, previews, and features.