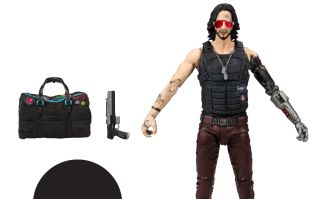 The latest addition to the rapidly growing stable of Cyberpunk 2077 merchandise is a suite of action figures from McFarlane Toys. You've got three to choose from: 7" Johnny Silverhand, 12" Johnny Silverhand, or a 7" male V based on the crew cut-sporting version of the customizable protagonist seen in some of the game's more recent trailers. No female V, though. There's technically a fourth 7" Johnny Silverhand which comes with different accessories - trading a guitar and bottle for a gun and sports bag - but that's a hair I can't be asked to split.

All of these figures sport 22 moving parts, allowing you to customize their pose and stance considerably. That's right; you too can build your ideal tiny Keanu Reeves. Truly, 2020 is a magical time. Or at least it will be once these figures are released this spring, presumably on or near Cyberpunk 2077's April 16 release date. They're up for pre-order now if you're dead-set on filling your shelves with cyberhunks.

At this point, Cyberpunk 2077 is practically a movement. It's got a prequel board game, an official card game (which isn't Cyber-Gwent, sadly), a snazzy SteelBook collection, and now action figures. It may or may not contain ugly cybertrucks. Someone turned it into a PS1 RPG. And yes, it's been recreated in Minecraft - the truest sign of a cultural phenomenon. All we need now is the damn game and we'll have the full set, and from what we've seen, it'll be worth the wait. Cyberpunk 2077 could well be an early GOTY contender.