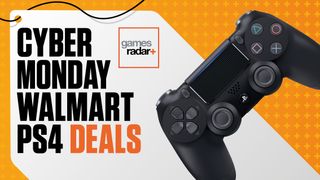 With Black Friday and Cyber Monday's offerings a distant (ish) memory, there's still opportunities to get a Sony-shaped bargain with the latest Cyber Week Walmart PS4 discounts. As seasoned deal hunters will know, it's not uncommon to see some of the season's best discounts actually continue into Cyber Week. What's more, given that the sales days have long been not one day but many days, we'll be seeing Cyber Monday game deals all through this week. Walmart, in particular, is keeping the ball rolling almost continuously, with massive, and at the very least consistently good, deals dropping around the clock. That's why we strongly advise keeping tabs on this guide, as you never know when one of the year's best PS4 games or accessories will get a price cut.

While today, the Cyber deals day, itself is, admittedly, more likely to produce the best Cyber Monday Walmart PS4 discounts on PS4 games, accessories, and DualShock 4 controllers, we'll be keeping you updated on any worthwhile deals on PS4 Pro or Slim console packages too. With the advent of PS5 next year, these console bundles are likely to get some stern, price dropping treatment as retailers take the approach of the current gen being on their last legs (they're not).

Naturally, Walmart is going to cater more to US audiences, so be sure to check out the best PS4 Cyber Week UK deal if you aren't feeling the Walmart love. As you'll see, you still have plenty of options when it comes to Cyber Week PS4 deals, including the latest games, accessories, DualShock 4 controllers, and console packages.

Days Gone | $29.83 at Walmart
Climb aboard your motorcycle and take on an apocalyptic world full of zombie-like creatures, for a 66% saving and the cheapest price we've seen yet.View Deal

Sony PS4 Platinum wireless headset | $116.96 at Walmart (save $24)
If you can stretch the budget a bit further, the Platinum headset is really worth it. A quality set of cans and it gives you a wealth of PlayStation exclusive features.View Deal