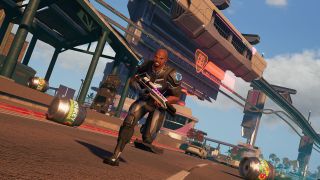 After a long development cycle tortured by delays, Crackdown 3 has arrived, and with it a blast from the sandbox past. It’s very much more of the same chaos, just with the stakes raised way higher. As well as being able to play as Terry Crews, series fans will be delighted to hear that the chaotic destruction and agility orb hunting feels better than ever. If you’ve played a Crackdown game before though, you’ll know that the main aim is to level up your agent as quickly as possible in order to conquer the kingpins that rule the landscape. Here are 11 Crackdown 3 tips to help you achieve peak performance when you get your hands on the game.

This one is fairly self-explanatory but easily forgotten if you’re trying to push through the world guns-first. Everything in moderation is the Crackdown 3 mantra, and this means balancing out all of your five skills where possible to ensure that your agent is a force of nature in any engagement. Whilst it may seem that there are so many agility orbs in the world that you won’t have to worry about it, we’d suggest that if you see a string of orbs you should immediately seek them out. Once you reach level 3 or 4 agility it becomes very difficult to rank up, and you will need all the help you can get if you want to scale the final tower, so happy hunting!

As well as Agility Orbs, Crackdown 3 has a smattering of Hidden Orbs, secret collectables that offer a burst of experience in every category. This means that if you’re lacking in one area you can bolster it quickly by collecting a few Hidden Orbs. They are found in fairly predictable areas, and in most cases, you can look around and look for blue rays of light and run into one. For skills like Driving and Strength that are difficult to level up in tandem with Explosions and Agility, Hidden Orbs are your means to make up the difference, so don’t forget about them!

One new feature in Crackdown 3 is the civilian militia that is being crushed by Elizabeth Niemand’s grip on the city. It may not seem so important at the start, and you may think you’re a one-man army, but no man is an island, and you will need the backup when you go up against some of the more nefarious villains on the map. Scale the propaganda towers and rescue the prisoners found in the hardpoints on the map to get them to join your cause. You won’t regret it!

Your RB button in Crackdown 3 is fairly important, given the plethora of new gadgets added to the game. However, you start with nothing, and the only way to wipe out gangs in quick succession is to pick up more powerful grenades and gizmos. They appear on the map with a grenade icon, and once you pick them up they’re yours forever. From bog standard frag grenades to chemical charges that poison foes in a designated area, your gadgets are your best friend, so don’t forget about building an arsenal.

Weapons in Crackdown 3 are far easier to come by than in previous games, and you should make a habit of grabbing everything that is dropped by the enemies you wipe the floor with. It doesn’t matter whether it’s a machine pistol or a rocket launcher, when you pick it up, it will be permanently added to your inventory, so it's important to grab them to make sure you’re ready for any situation.

This is a bit of a cheeky trick, but in Crackdown 3, you can force unlock supply points (denoted by the Crackdown symbol) by simply landing near them. This means that you can open the map up easily by throwing yourself at a point, despite how heavily defended it may be. This may seem silly at first, but head over to the centre of the map in New Pantheon, forget about how difficult the foes are and just crash land onto a point to give you a better grip on the landscape in the early throes of the game. This is important if you want to pick up the most lucrative three or four-star orbs and make your agent as powerful as possible.

7. Get the best weapons early

Crackdown 3 is much more fun with explosions, which should be common knowledge to anyone who has played the previous games. Once you’ve got a grip on the more dangerous parts of the map, you can then quickly pick up some of the best weapons in the game that make most scraps a chaotic cakewalk. As you traverse deeper into New Pantheon, you will find more difficult enemies. Do your best to beat just one and pick up their weapon and it will be unlocked forever. This is an easy means to pick up a yellow (explosive weapon) like the Homing Rocket as early as possible so you can start turning enemies into mush.

8. Get driving to level one quickly

In every Crackdown game, most players forget about the driving skill, and it’s fairly understandable as even in the third instalment, the game provides little reason for you to focus on it as everything else is more fun. However, you do want to get driving to level one as soon as possible just to get it out of the way. Once you hit level one you unlock the Agency Car, which you can summon with the D-Pad, so hit some Stunt Rings and drift around the winding roads in the clunky civilian cars so you can go on to greener pastures.

9. Become familiar with a bit of Grand Theft Auto

Whilst the civilian-controlled vehicles aren’t the best to use in Crackdown 3, if you’re a completionist and want to complete your garage, you should make a habit of carjacking any vehicle that looks new, as they are unlocked permanently as soon as you put your butt on the leather. Better still, jack enemy vehicles with mounted weaponry and use them to barge through a blockade.

It sounds ridiculous, but your best defence in Crackdown 3 is often the L3 button. Rolling and air dashing through crowded engagements will give you the precious I-frames you need to survive, and this becomes incredibly important when the vicious Chimera gas is put into play by TerraNova. Rolling makes your agent impervious to the fumes, so it’s good practice to just keep clicking L3 as much as possible, especially when you’re taking on a difficult group of foes.

11. Anchor your agent around resupply stations

Another habit that’s worth getting into is using resupply stations as and when you find them. They are marked on the map by a rounded triangle symbol and are scattered throughout the world, mostly localized to the areas you’re trying to liberate from TerraNova control. When you’re fighting, anchor yourself around the supply stations so you can keep coming back for more ammo when necessary. You can also use unlocked supply points as makeshift resupply stations by standing on them. This will fill your ammo back up when you end up in a bind.

12. Don’t forget about your fists

One criticism of Crackdown 3 is that it doesn’t do a great job of forcing you to utilize every skill properly. It’s very easy to get used to just blowing your enemies up and focusing on explosions more than anything else because it’s the easiest way to get through the competition. We’d recommend you don’t forget about your fists, though. First, it’s great fun to ground pound and power punch enemies into the aether, but most importantly it can quickly get you out of a bind if you’re stuck on land with no ammo. You’ll be surprised how effective it is, even against the most formidable of foes and the machinery that they’re protecting.

Crackdown 3 not doing it for you? Why not check out our pick of the most anticipated upcoming Xbox One games?