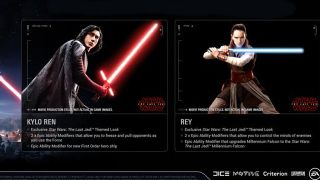 Both Rey and Kylo Ren will get cool new outfits in Star Wars: The Last Jedi and our first good look at them has arrived… via Star Wars Battlefront 2. Folks who pre-order the game will get special skins for both characters and GameStop Ireland's site went ahead and posted this promo image that reveals them.

The fine print on both images proves that these aren't just skins for the game that were "inspired" by the movie or anything - they're straight up "movie production stills". So what can we see?

Kylo's still sporting his red lightsaber with the special shoulder-scorching crossguards. It looks like he's traded in his old hooded cloak for a more Vader-ly cape, and he isn't wearing his helmet (which we last saw smashed and smoking in the trailer for Star Wars: The Last Jedi). He may have some nifty new shoulderpads, too.

We've seen some of Rey's outfit in the form of those T-shirt drawings, but this shows a lot more (and in color). And holy midichlorians, she looks a lot like Qui-Gon Jinn from Star Wars: The Phantom Menace! The outfit is similar but it's the hair that really does it.

Is the similarity just a way to visually tie Rey to the old Jedi Order (which she and all the other kids from post-Imperial times probably romanticize) or is it a hint at her parentage? Qui-Gon was willing to tell the Jedi Council to stick it in their pointy ears about training Anakin so you never know - maybe he had a secret family on the side, too. Great grandpa Qui-Gon!