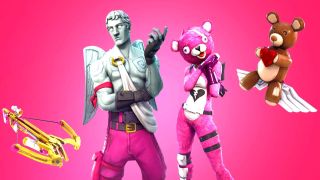 You could spend next week's internationally recognised day of romance sharing precious time with friends and loved ones, or... you could hook yourself up with some V-Bucks, nab one of Fortnite Battle Royale's new seasonal costumes, and have fun role-playing as Cupid by shooting people with a silent crossbow this Valentine's Day.

Epic Games' latest update for Battle Royale, which is out now, introduces a box of chocolates' worth of new goodies to enjoy, both cosmetic and otherwise.

Two new themed costumes are available to purchase via the in-game currency of V-Bucks or with real world cash and, as seen above, they're pretty freaky; one being a statue of Cupid that brings to mind the Weeping Angels from Doctor Who and the other being a giant pink bear not wholly dissimilar to the sort of thing you might find in Five Nights at Freddy's.

On top of that, the crossbow weapon will be arriving to Battle Royale, though it's unclear whether this will just be available for a limited time, or a permanent new addition to the game's popular last man standing PvP mode. The fact that it's covered in hearts suggests the former.

The crossbow fires arrows, an unlimited ammo type (game changer), and can be found both in treasure chests and randomly across the island, with Rare and Epic variants. The patch notes don't detail how much damage the crossbow is capable of but, considering the unlimited ammo advantage, I doubt it's going to be crazy powerful.

The patch also brings a range of hot fixes and updates to Fortnite Battle Royale. The recently added Shooting Test #1 PTE is now only playable in Solo mode, with certain weapons tweaked for more balance, and players should no longer find themselves sliding off rooftops by mistake, which is definitely a good thing.

Save the World , Fortnite's PVE component, is receiving an update, too, but you can read the full patch notes here for more information about that.

Will you be bearing Valentine's Day with a new costume purchase, or are you more excited about that swanky new crossbow? Let us know in the comments.