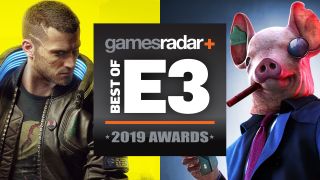 Despite the fact there was no PlayStation E3 2019 conference this year, it doesn't mean that the E3 2019 games line-up was a total bust. Microsoft announced its next console, Xbox Project Scarlett, Ubisoft wowed crowds with a line-up of exciting titles, and Nintendo pulled a Zelda Breath of the Wild sequel out of the bag. And that's just a handful of the big announcements straight out of E3 2019 too. So without further ado, here is GamesRadar's pick of the best games of E3 2019, including our vote for the Game of the Show:

Watch Dogs Legion isn't just our game of the show because it's tackling post-Brexit Britain head-on, but because it's one of the only games at E3 2019 really pushing gameplay boundaries. Set in an alternate near-future version of London, where a serious change in politics has meant mass employment, a heavy reliance of automation, and a general unrest has taken over the city. Like other games in the series, you play as a member of Dedsec, but where Legion differs is that you'll be crafting your own team of rebellious agents, and thereby creating a raft of playable characters that you can switch to at any point. Imagine GTA 5 but with 20 characters instead of three, and you'll get the gist. Watch Dogs Legion is doing something that few games truly are, and that's innovating. Whether that's totally successful when the full game arrives in March 2020 remains to be seen, but of all the games at E3 2019, it was the game that made the biggest impression.

After Keanu Reeves appeared at the Xbox E3 2019 press conference, you'd be hard pressed to find anyone not talking about Cyberpunk 2077 at E3 this year. CD Projekt Red's upcoming sci-fi RPG finally got a release date, and from what we've seen of the game being demoed behind closed doors, the Polish developer has got another masterpiece on its hands. And no, not just because it features Reeves as a ghostly punk rocker. No, this is another beautifully crafted world, where every choice you make matters. There are multiple endings, different backstories to choose from, a diverse range of character creation options and a huge skill tree to work through to get the version of hero V that best reflects your playstyle. Gameplay wise, there's as much emphasis on strength as there is hacking, but it really is up to you where you want to put your RPG points. Because of that, it might just be the biggest game that we have seen in years, and you've not got too much longer to wait for it either.

Zombieland tells us that the first rule of surviving the apocalypse, Cardio, is crucial for outrunning and outlasting the living dead, but how are we supposed to put this theory to the test in boring, normal, zombie-free society? Dying Light 2 provides us with exactly the kind of virtual thought experiment we need, presenting an open world built from the ground up for freerunning above, beneath, and sometimes straight through the undead enemies of its 15 year old apocalypse. Our E3 2019 demo revealed newly introduced protagonist Aiden skirting across the rooftops of Techland's latest urban landscape, known only as "The City", making a stream of player-driven decisions both tactical and story-centric, and beating anyone in his way into a bloody pulp via Dying Light 2's ballet of bloody combat. Despite the horror of its central premise, this unexpected sequel is quickly becoming one of the most enticing games to watch out for in 2020.

Borderlands 3 proved a good fit for E3 2019, as the mayhem depicted in its latest hands-on demo paired nicely with the chaos of the convention floor itself. Said demo gave us the chance to take on Mouthpiece, one of many new bosses being introduced to the Borderlands-verse with Gearbox's upcoming looter shooter sequel, and perfectly encapsulated every reason we're excited for our long awaited return to Pandora. The gunplay feels tighter and more responsive than ever, the cel-shaded aesthetic appears both impressively modernised yet strikingly familiar, and that inimitable Borderlands humour hasn't lost a single bit of its guilty charm. All that's left to do now is sit, wait, and set our Spotify playlists on an endless loop of awful dubstep music until Borderlands 3 finally releases on September 13, later this year.

EA’s third-person action adventure had felt curiously uninspiring heading into E3 2019, based on its muddled initial CGI trailer and bland protagonist Cal Kestis. A brief gameplay demo allayed those fears, revealing a cinematic Star Wars action game that blends the best elements of Uncharted (seamless flow between cut-scenes and in-game action), Dark Souls (a deceptively smart parry and block system) and The Legend of Zelda: Breath of the Wild (time-slowing puzzles and dodge moves). A behind-closed doors demo of unseen Star Wars Jedi: Fallen Order footage, showed off an epic AT-AT climbing cinematic sequence set on the swamps of wookie-planet Kashyyyk. Reassuringly, the game will alternate corridor-combat with epic scale, with the fan-pleasing ability to pilot the AT-AT – plus welcome cameos from Rogue One, including guerrilla leader Saw Gerrera and a K-2S0 lookalike. Hands-on, the news is even better. Our Star Wars Jedi: Fallen Order preview praised developer Respawn for creating a "Star Wars game worthy of the name". Through its blend of pomp and depth, Fallen Order finally promises to restore balance to the force.

Imagine the world of Jurassic World Evolution but replace all those dinos with critters from around the globe and you'll have a sneak peek at what Planet Zoo is going to offer when it's out this November. It's a zoo simulator at heart, with an emphasis on conservation, education and ultimately releasing your well adjusted animals safely back into the wild. Building the zoo itself will be a labour of love, with every element available for you to build from scratch, including the monkey gym. And, of course, most importantly from the demo we saw at E3 the animals themselves look fantastic, with each one having their own personality, traits and behaviour quirks that should make running your zoo an absolute joy. If you're into simulation games and wildlife rendered in a way that would make David Attenborough blush, you're going to need Planet Zoo in your life.

Despite the fact that we only got to go hands-on with the Water Gym in our Pokemon Sword and Shield preview – the two upcoming Pokemon Switch games – it didn't detract from the fact that this pair of games is going to offer a significant upgrade to the previous series' entries. An open-world plain known as the Wild Area where the Pokemon visibly roam a la Pokemon Let's Go, a brand new setting, new Gen 8 Pokemon and more, are all contributing to the excitement around Game Freak's Switch title. Combine all that with the best graphics the series has ever seen, and an adorable trio of starters (and an electric corgi) and it's shaping up to be another top notch year for Nintendo.

Time loops are starting to become a familiar commodity in video games, from the 60 second cycle of Minit to the half hour Groundhog Day that players have been more recently going through in The Outer Wilds. 12 Minutes' time loop, as you may have already guessed, repeats itself over the same titular time period of 12 minutes until players have figured out a way to escape, but the synopsis itself is far more grounded than most. To avoid spoiling anything, let's just say you play as a seemingly unexceptional nobody about to celebrate some good news with their wife but, unless you do something about it, every loop of your return home from work almost never ends well. Another promising ID@Xbox title, this time from former Art Director of The Witness Luis Antonio, 12 Minutes is cinematic, cerebral, and unabashedly Kubrickian, easily making it one of the most interesting games we played at E3 2019. Keep this one on your radar, and start practicing those time management skills in preparation.

As we said in our Doom Eternal preview out of E3 2019, the upcoming sequel feels like the ultimate form of Doom. It's everything we loved about Doom (2016) – secret-heavy levels, fast combat, and downright glorious gore – mixed with enemies and elements we loved in the original Doom games. The whole thing's been dialed to another level in Doom Eternal, thanks in large part to the introduction of new and intuitive combat options, like the shotgun-mounted grappling hook and shoulder-mounted flamethrower. Movement is faster, kills are flashier, and judging from what we've seen of it so far, Doom Eternal will also take us to some almost angelic environments for a nice change of pace from hell descending upon Earth. This is a smarter, more creative Doom with combat begging to be mastered and levels begging to be explored, so we can't wait to rip and tear it apart this November.

In our The Outer Worlds preview at E3 2019, we said Obsidian's upcoming title was easily looking like the best RPG that Bethesda never made, and we stand by the remark. The latest game from the creators of Fallout: New Vegas and Divinity: Original Sin is a quick witted, classically fashioned, and immediately likeable ode to the role playing games of old, with distinctly modernised tweaks in all the right places. Smart where it needs to be, funny when it matters, and loud where it counts, The Outer Worlds has risen from relative secrecy to super stardom in the space of six months, suggesting there's a genuine hunger for exactly the kind of odyssean experience that Obsidian is offering.  Hopefully the game can make good on everything its promising, and allow its famed indie studio to end on a high before it starts making first party Xbox games for Microsoft on a full time basis. Fingers crossed.

The Legend of Zelda: Link's Awakening

Call it a remaster, call it a reimagining, but there's no way of getting away from the fact that this re-release of The Legend of Zelda: Link's Awakening on the Nintendo Switch is downright adorable. Playing out exactly how you remember the original, it's a delight that a new generation of gamers will get to experience the magical, light-hearted frolics that make up Link's adventures with the Wind Fish on Koholint Island. But this time around, Nintendo has decked out this little world with graphics that make it seem like it's popped straight out of a toy shop. Everything is just so glossy, with the tops of trees and buildings finished with a sheen that makes them look like they're made out of hard plastic, like some Fisher Price toys. It's a look that really suits the game's tone, and makes us unbelievably excited dive in all over again.

If you want more E3 goodness, why not check out our 60 second preview of Watch Dogs Legion straight from E3: