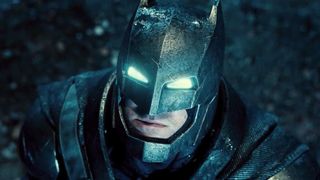 Encouraging words on the DC cinematic universe front. Ben Affleck recently took time away from filming the upcoming Justice League to give some information on his Batman solo movie - which Affleck himself will direct - and it sounds like the man knows what he wants: a detective movie.

"The world's greatest detective aspect of Batman is more present in [Justice League] than it was in [Batman v Superman], and will probably be expanded upon further in a Batman movie that I would do," Affleck said, according to i09. "I think all the great Batman stories are, at their heart, detective stories. That's why they feel like noir movies in a way. Somehow it feels like it could be The Maltese Falcon."

That certainly sounds different than the brooding, karate-chopping, Superman-punching version of Bats that we saw in Batman v Superman, so count me in. Not that I didn't like seeing ol' Bruce kick butt, but I like the Batman that lurks in the shadows and solves mysteries too. As for when we'll get to see this highly-anticipated flick, Affleck wasn't sure.

"I think [Warner Bros. have] a date for it. Although, I don't know if I would necessarily be able to make that date because I don't have a script that's ready yet. So my timetable is I'm not going to make a movie until there's a script that I think is good," Affleck said. "[It]'s something that would have to pass a very high bar for me. It's not just like, 'Yeah, that might be fun, let's go try this out."