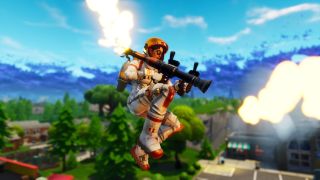 Fortnite's latest Limited-Time Mode combines two beloved LTMs of old into one instant classic: welcome to Fly Explosives. Yes, that is a pun on High Explosives and the wordplay is entirely justified. The new LTM turns Fortnite on its head by limiting weapons solely to explosives like RPGs and grenade launchers, and by re-enabling jetpacks. You knew they were too cool to stay gone for good.

Back from the vault, take to the skies and make it rain rockets in our new Fly Explosives LTM live now! pic.twitter.com/umJqfq9YZiJuly 31, 2018

Jetpacks aren't coming back to Fortnite Battle Royale at large like when they were first added to the game (though you can use them in Playground for the time being), but at least this new version has a faster recharge speed and decreased burn rate. Speaking of staying in the air, Fly Explosives is a very different kind of Fortnite.

The height and shelter advantage offered by building is nullified by the fact that someone is always liable to come sailing over your carefully constructed base and fire a rocket down the middle, or failing that, knock it down in two hits. But it isn't just chaos and death everywhere (or at least it isn't if you can survive the first minute or two). Despite the fact that everybody's dishing out big damage all the time, the relatively slow travel speed of grenades and rockets means you're actually more likely to see who you're fighting.

Boosting around the map, locking eyes with an enemy, then facing off in an aerial duel with both of you trying to predict when and where the other will land, is a thrill. It reminds me of Starsiege Tribes, or if Pharah was the only character in Overwatch. Just make sure you turn your volume up so you can hear those rockets coming and dodge out of the way in time.

Don't neglect the precious gift that is a portable fort, even in High Explosives mode. Check out our Fortnite Port-a-Fort guide.