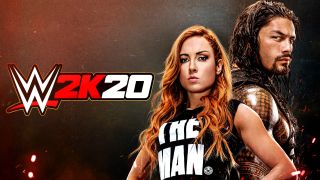 2018-19 breakout star Becky Lynch has been tabbed for the WWE 2K20 cover since the turn of the year – and today publisher 2K confirmed that she will indeed grace the box for the upcoming grap sim. Joining the Irish 'lass kicker' front and center of all promotional materials will be WWE's 'big dog', Roman Reigns.

Also confirmed is the WWE 2K20 release date of 22 October.

The announcement comes alongside a video starring Xavier Woods, in which the New Day member talks through a raft of gameplay details. You can watch it below, but the key takeaway is that all your favourite modes are returning, with Lynch earning a prominent role in this year's 2K Showcase. She appears alongside long-time friends and rivals Sasha Banks, Charlotte and Becky Lynch in a story mode that will recap the self-proclaimed Four Horsewomen's career highs and lows.

Also of interest are some confirmed names for the WWE 2K20 roster, all of whom GR will profile in due course. Chyna forms this year's pre-order DLC alongside Hulk Hogan and special versions of The Rock and Mankind. Papa Shango, Steve Austin, Braun Strowman, Shawn Michaels, Paul Heyman (likely non-playable), Randy Savage, Sheamus, Velveteen Dream, The Miz, Nia Jax, and Asuka can also now be added to the list of confirmed wrestlers in WWE 2K20.

Also big is the inclusion of Mixed Match Challenge – AKA two-on-two matches featuring men's wrestlers tagging with female ones – for the first time on the current generation of consoles. Long-term fans will says it's a long overdue addition, but those complaints should quickly evaporate if it helps to freshen up the somewhat staid universe mode, as expected.

WWE 2K20 is released on 22 October. For more on Ireland's greatest lady grappler, check out this Becky Lynch interview from the GamesRadar archives.