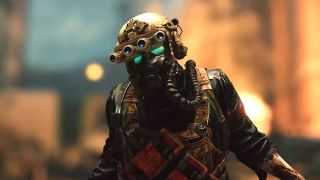 World War Z horde mode finally brings a classic combination to the action-packed online shooter. Zombies and horde modes go together like peanut butter and jelly, and as of the latest update, you can enjoy them together in Horde Mode Z. Yes, they had to put a "Z" on the end, and It's exactly what you'd expect: up to four players band together to fight for their survival against increasingly massive and deadly hordes of zombies.

You'll also get modern Horde Mode conveniences in the form of constructible defenses - from barricades to automated turrets to mortars - and a random assortment of shop weapons, all of which can be obtained with the resources you earn from slaughtering zombies. Optional side missions for each wave, like getting 25 kills with melee weapons, will give you even more resources. Certain parts of the map will also yield weapons and equipment if you can find the time to forage between waves.

While you're out there cutting down zombies like they're amber waves of grain, you'll want to watch out for a new addition to the undead armies - and really, really make sure you don't kill it too close. It's called The Bomber, and it's a zombified military munitions expert. It's strapped to the gills with explosives, which you can claim for yourself if you down it with limb shots then run up and disarm the bombs before they go off. Otherwise The Bomber will explode - handy if he's in the middle of a zombie horde, not so handy if your friends go up in the blaze.

Saber Interactive also re-confirmed that it's planning to add cross-play support for World War Z's PvE modes in the final update for the game's second season, Update 6, and that it will have "more exciting news to announce soon". Until then, those endless waves of zombies should keep you busy.

Make sure you check out the 100 best games of the decade between rounds of zombie survival.