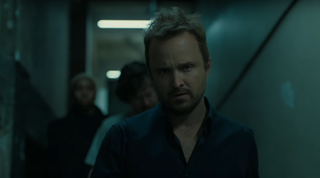 The Westworld season 3 trailer is here, courtesy of SDCC 2019. You can watch it down below but, I warn you, it's just as mind-melting as you've come to expect from HBO's hit show. Even a trip to the outside world isn't making things much clearer.

Here's what we do know: Dolores, inevitably, is being framed as the Big Bad of Westworld season 3. We've even been clued in a little more as to Aaron Paul's character, Caleb: he's shadowing Dolores, and could be in league with his robot brethren. But, with this show, who knows?

Thandie Newton's Maeve, meanwhile, is traipsing around a Second World War-themed Park. After season 2's Shogun reveal, it's nice to have yet another themed world to lark about in - even if it is filled with robot Nazis.

It's a real looker of a trailer, too. Maybe we had gotten so worn down by the dusty confines of the original Westworld park that a change of scenery was all-too-needed, but this is seriously stunning. Expect to be wowed at every turn in Westworld season 3, if this trailer is any indication.

Oh, and Bernard's new look? I dig it - though it will no doubt open up a whole new box of theories. After all, multiple timelines are in vogue right now, and a fresh haircut could be the closest we'll get to revealing secrets at this stage.

HBO did not treat is to an exact Westworld season 3 release date, though we know the series will return in "2020". Before then, we can expect the Watchmen TV series, a trailer for which was also released at SDCC.

Want more from SDCC? Here's all of the San Diego Comic Con 2019 trailers released so far - all in one place.