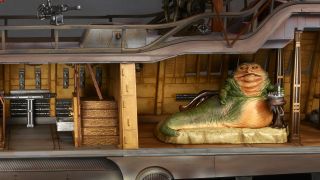 If your parents didn't love you enough and denied you the original Millenium Falcon toy, there's finally a way to heal those wounds. A $500 way, courtesy of the designers over at HasLab, Hasbro's version of Kickstarter. They've designed a 4-foot recreation of the Khetanna, Jabba the Hutt's barge from Star Wars: Episode VI Return of the Jedi, and they need your help to make it happen.

Included with the Khetanna are 3.75-inch scale figures of Jabba the Hutt and Yak Face. It has removable side panels so you can get to the innards easily, where you'll find the cockpit, the prisoner's cell, the armory, a galley, and Jabba's Lounge. The outside boasts rotating cannons and fill cloth sails. I mean, just look at it.

According to Hasbro, the design for the barge came from "sketches, research, and conversations with Lucasfilm" to make sure the recreation was as accurate as possible, even when it came to parts of the  model that weren't clear in the original reference photographs.

“Fans have been asking for Jabba’s Sail Barge for years, and it’s been exciting for us at Hasbro to watch the community rally around HasLab as we all come together to try and make this exciting endeavor a reality,” Steve Evans, design and development director for Star Wars at Hasbro, told GamesRadar+.

“Taking on such a large, detailed, and beloved vehicle like Jabba’s Sail Barge as our first HasLab initiative is ambitious, to say the least. But this is something really special for both the fan community and for Hasbro. Everything from the magnitude of the design process to the intricate detailing we brought to the vehicle’s sculpt speaks to our commitment to making this vehicle a reality dream item for fans, and we couldn’t be happier with the reaction we’ve received thus far.”

The crowdfunding campaign launched in February, and is nearing its end. Right now the project has one week to find another 1300 backers, otherwise it'll be come just another crushed dream for your inner child to mourn.

Can't get enough Star Wars? Check out our 20 best Star Wars quotes to practice in front of the mirror with your Lightsaber