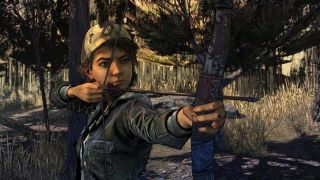 If you've been waiting a while to play through all of Telltale's The Walking Dead on Switch, your wait is finally over: seasons 2 and 3 dropped on the Nintendo eShop today.

The surprise drop is certainly a welcome one, as the release window for the series has been, well, a bit of a mess. The first season launched on Switch in August 2018, but Telltale Games ran into trouble shortly after that (read: mass layoffs, followed by a full studio closure), and Skybound Games inherited the rights to the IP. When Skybound took over, it completed the last two episodes of The Walking Dead's Final Season with the help of former Telltale employees, but put the other Switch ports on hold - until now.

As of today, Season 2 and Season 3: A New Frontier are available on Switch for $15 / £13 each. There's no word on whether or not the standalone installment The Walking Dead: Michonne will come to Switch. But for the first time ever, the complete game series will be available on the Steam Store - Skybound is re-releasing the first two seasons and adding the last two to round out the collection. The Walking Dead series will drop on Steam later this week.

It's nice to see The Walking Dead series finally get its chance to shine on the Switch, and to see it on Steam. It's a great series that didn't deserve to be split up in such a disjointed manner, so I'm glad Skybound was able to help complete the ports.