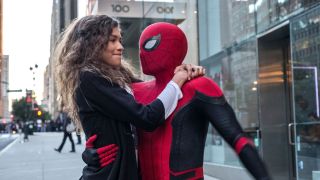 Where next after Mysterio? The Spider-Man: Far From Home director has been (surprisingly) candid about which member of Spidey’s rogues’ gallery he would pick to face off against the web-slinger in the MCU’s stab at Spider-Man 3. And after the big twist from the Spider-Man: Far From Home post-credits scene, Jon Watts is thinking a little more outside the box for a future villain: Kraven.

Spider-Man: Far From Home spoilers ahead. You have been warned.

Speaking to Uproxx, Watts – who has directed both Far From Home and Spider-Man: Homecoming – revealed that his mantra behind picking a baddie is to “try to start with what [we] haven’t seen before.”

With that in mind, it’s perhaps not surprising that he’s shying away from the likes of Norman Osborn, Electro, and the Lizard for his dream choice of a Spider-Man: Far From Home sequel villain.

“I would love Kraven,” revealed Watts. “It’s just the trick of how do you do Kraven in a movie?”

For the uninitiated, Kraven is a villain-of-sorts who prides himself on hunting down various prey, including the likes of Spider-Man. He’s come about as close as anyone to killing Spidey in the comics, too, over the decades.

Putting Kraven front and centre of an MCU movie is potentially a far easier proposition than translating recent villain Mysterio – a failed magician with a penchant for parlour tricks – onto the big-screen, and that seemed to go down pretty well.

It’s also worth noting, too, that Peter Parker’s identity is now readily available to the wider world thanks to the events of the Spider-Man: Far From Home ending. It wouldn’t be that much of a stretch for the hunter Kraven to sniff out his next target, especially if the webhead goes into hiding.

However, you shouldn’t get your hopes up just yet. Spider-Man 3, of course, hasn’t been officially confirmed, and Watts says he “[doesn’t] know who’s next.”

We’ve got our fingers crossed for Kraven now, though – and we’ll be tracking any potential villain news every step of the way here at GamesRadar.

Take a glimpse at the future of the MCU with our look at the possible Marvel Phase 4 plans.