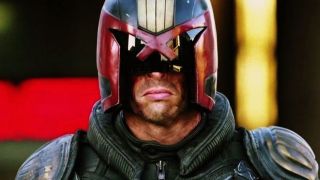 What’s a Dredd TV show without Judge freakin’ Dredd himself? The TV show may be slowly but surely making in-roads into appearing on our screens but there’s been very little in the way of concrete information. Except one of the show’s producers wants Karl Urban on Judge Dredd: Mega-City One. Well, he is the law, after all.

Appearing on the 2000 AD Thrill-Cast (H/T Screen Rant), producer Brian Jenkins opened up about the possibility of Karl Urban – the last guy to play Dredd on-screen – to reprise his ass-kicking role: “So, we’re going to have some long and complicated conversations I would imagine, and we’ll see where we go. It’s too early to tell yet, but if we can use him and he’s available to us, then I think that would be absolutely brilliant. There’s always a possibility he will be busy, or that his schedule for other movies won’t allow. Basically, we don’t know at this stage.”

Good news? It’s not a definite no. Bad news? Karl Urban sounds like a pretty busy guy. Putting my cynic hat on for a moment, the podcast sounds like a perfect way for the producer to send out feelers to Urban to check if he’s interested.

Now would be the perfect chance to step right back into the role, especially after he delivered some crushing news to Dredd fans last year that there wouldn’t be a sequel to his 2012 cult classic.

Dredd update : Unfortunately a sequel is no closer to happening , options have been discussed but there is no sequel in " development " .22 June 2016

But, honestly, he’s been banging the Dredd drum for some time now. Who wouldn’t want him to be Judge, jury and executioner yet again?

So, should Judge Dredd: Mega-City One stand on its own two feet, or is falling back on the last on-screen Dredd the way to go? You be the, ahem, judge of that.