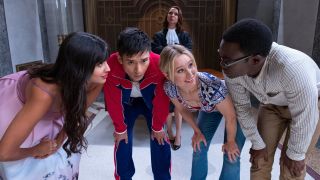 The Good Place cast dropped by San Diego Comic-Con to discuss the upcoming fourth and final season of the show. And although a world without new episode of The Good Place may sound like The Bad Place, there's no way that's true when season 4 sounds this good.

Those in attendance at the San Diego Comic-Con panel were treated to the opening minutes of season 4. The footage included a new, apparently very boring man, entering Eleanor 's Medium Place. Eleanor then asks Janet to summon a baby elephant made of light who tells the universe's secrets - one of which is that Shirley Temple killed JFK. There's also a scene where Michael talks to a Disco Janet, who he describes as "a lot".

A full trailer for season 4 is unlikely to drop anytime soon, as the cast are yet to even read the final episode's script. Apparently, showrunner Michael Schur did not want them to read what happens in the finale in case Ted Danson spilt the beans at SDCC.

All good things must come to an end

D'Arcy Carden, who plays Janet, was candid about the show ending, saying: "It sucks." However, Jameela Jamil added that: “It’s so cool to know we’re completing the story as it was supposed to be completed.” Schur has previously spoken about bringing The Good Place to a natural end, rather than forcing new episodes to come.

Jason Mendoza brings the house down

While filming on season 4, Manny Jacinto (Jason) managed to halt the entire production for an hour after delivering a one-liner. The joke was apparently so funny that everyone stopped working to laugh and laugh, with Ted Danson crying from laughter. The cast added that, if you look carefully in some scenes, you can see them trying not to crack after Jacinto delivers his lines.

Kristen Bell revealed that has directed an episode in the final season. Speaking about her decision to go behind the camera, Bell said: “I’m already pretty bossy... I’m sorry, I mean I lean in a lot.”

D'Arcy Carden portrayal of Janet is one of the show's highlight, and last season, in the episode "Janets", she played multiple Janets. However, while the shoe was nominated for Outstanding Comedy at the Emmys, Carden was not - something Schur brought up at SDCC, saying that the awards board were "crazy" not to nominate Janet.

For trailers from SDCC, head over to our SDCC 2019 trailers hub, and take a look at the San Diego Comic Con 2019 schedule so you know exactly what to expect in the days ahead.