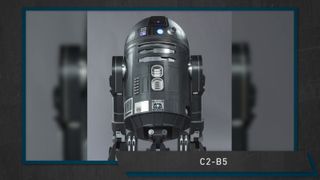 Star Wars: Rogue One's various trailers and images mean we're already well acquainted with Alan Tudyk's droid K-2SO - who was reprogrammed by the Rebellion to aid in the fight against the Empire - but that won't be the only new robot showing up in the anthology film.

During this week's edition of The Star Wars Show, Lucasfilm revealed the first image of Imperial astromech droid C2-B5. Watch it below (skip to 2:08)...

Not much info was revealed about C2-B5 - who bears more than a passing resemblance to R2-D2, albeit in black paint instead of white - but Star Wars Show host Peter Townley notes that droids under Empire rule are frequently subjected to memory wipes. We'll have to wait a few more months to find out exactly how that factors into Rogue One's plot.