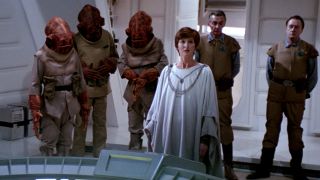 Pablo Hidalgo, a member of Lucasfilm’s Star Wars story group, has clarified a key piece of Star Wars lore: many Bothans died to bring the rebellion information about the Death Star, but they never actually stole any blueprints.

Before Rogue One came out last year, some Star Wars fans assumed it might include reference to the Bothan spies mentioned by Mon Mothma:

But most quickly realized that this speech is from Return of the Jedi and references the second Death Star, not the original that appeared in Rogue One. So while Rogue One centered on Jyn Erso and a few other ragtag members of the upstart rebellion, could we possibly expect to see a story one day about the Bothans who stole the Death Star plans offscreen during the events of Return of the Jedi? Well, not exactly - because Hidalgo tells SFX Magazine that it’s a misconception that Bothans ever stole plans in the first place.

“I would like to finally clarify that the Bothans never stole any Death Star plans,” he said. “Not make a story about it, just call attention to what’s in Return of the Jedi, because the lead-in to Rogue One drew a lot of attention to a basic misunderstanding.” And then he dropped a truth bomb: “The Bothans just provided information on the Death Star’s location, status, and that the Emperor was to visit; Mon Mothma never once mentions plans.”

Like many fans, I’d always thought that the Bothans were responsible for stealing actual plans, but it turns out that was an incorrect assumption. And if I had paid close enough attention, I might have realized my mistake far earlier - Hidalgo points out that the evidence was right in front of me the whole time. “That hologram the rebels looked at weren’t plans - blueprints wouldn’t show an incomplete Death Star as if the Empire never intended to finish it.”

That attention to detail is why J.J. Abrams reportedly e-mailed Hidalgo up to three times a day during The Force Awakens to ask questions about the tiniest pieces of Star Wars lore to make sure everything lined up. The galaxy far, far away is in good hands.

Read more about Rogue One in the latest edition of SFX Magazine, on sale now. Buy future issues here.