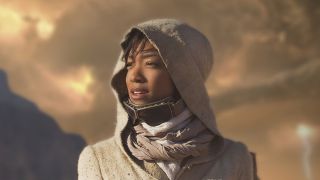 Does that semi-futuristic desert garb look kinda familiar to you? It did to these folks, too.

@startrekcbs @SonequaMG I think you may have made a mistake. They look like they are from another "Star" franchise.May 17, 2017

Many were just pleased to get their first look at the next chapter in Star Trek's 50-year television history.

Meanwhile, some lines of speculation have already begun...

@fmarcanojr @startrekcbs @SonequaMG Unless she starts as an officer on the Shenzhou and transfers to the Discovery in the first episode🤔May 17, 2017

Read our Star Trek: Discovery roundup article for all the news as it comes together. Not to mention what Lucius Malfoy's actor playing the Discovery's captain could mean for the show.