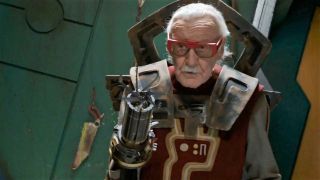 Even though Stan Lee has passed away, his indomitable spirit lives on. The Marvel Comics co-founder also filmed at least a couple of appearances in future movies before his death. So, at the very least, we’ll get to see him on screen at least once more this year, plus a few times in 2019 to boot. Here’s Stan Lee’s next upcoming movie appearances, as well as the latest rumours surrounding any more walk-on parts.

Spider-Man: Into the Spider-Verse

First up, a non-MCU effort, which is heading into theatres in December. Our Into the Spider-Verse preview outlined a playfulness than Stan Lee would definitely admire, and his cameo is no different. I won’t go into details here but, in retrospect, it is one of his most down-to-earth showings yet.

Stan the Man showing up in Captain Marvel hasn’t been officially confirmed, but Kevin Feige has hinted that Lee has filmed at least a few more cameos, telling Variety: “I’m not going to tell you what [movies] specifically, but Stan always appreciated a good surprise.”

Meanwhile, Stan Lee will be appearing in Avengers: Endgame. Co-director Joe Russo confirmed the news to the BBC (H/T ComicBook.com) last year, saying: “So, we try to get him out for his cameos around the same time. So if we have other movies shooting on the same lot that we're on, for instance [Ant-Man and the Wasp] or Avengers 4, we group his cameos together and then move him from one set to the next and get him through his cameos in one day.”

Here’s where it gets a little sad. Nothing so far has indicated that Stan Lee filmed a quick snippet for Spider-Man: Far From Home, so Avengers 4 could very well end up being his last appearance in the MCU. But there’s still one movie left which could serve as Stan Lee’s final movie appearance…

Again, it’s away from the MCU, but Stan Lee has shown up in a handful of X-Men movies – and it’d be unfortunate if he didn’t get a chance to do it one last time. However, it looks as if (via EW) that Stan Lee reportedly won’t feature in the movie, which is a real shame.

While you're here, why not check out every single one of the Stan Lee cameos that have peppered Marvel movies since the 1980s...