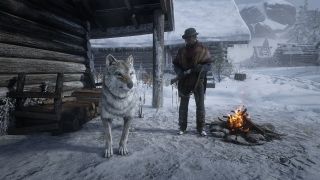 It took intrepid modders about 17 seconds to Red Dead Redemption 2 mods that mess with Red Dead Redemption 2 in all sorts of absurd ways. Make Arthur Morgan the Joker! Skip the entire first act! Play as a horse, then shake your equine junk in other outlaws’ faces! Yeah, maybe you shouldn’t do that last one (you totally should).

Whether you want to apply a cinematic reshade, insert music tracks from the first Redemption or simply turn Arthur into the Wild West Clown Prince of Crime, we’ve picked out the best Red Dead Redemption 2 mods you can download right now.

How to add Red Dead Redemption 2 mods to your PC

Modding Red Dead Redemption 2 is usually a pretty straightforward process. Sites like Nexusmods give you simple instructions when you click on a specific mod’s page, taking the uneasy guesswork out of the outlaw-tweaking equation. To install most of the mods below, simply located the root directory of where you installed Red Dead Redemption 2 – so [Drive]: > [Install Location] > [Game Files]. Then it’s a case of dragging and dropping the files into the install folder (and replacing any identically named original files), then getting on with the modded Old West acts.

As a general rule, always back up your game files before installing any mod. Depending on your PC setup, mods can break your game, yet if you have the original files in an easy to access place, you can simply delete the modded versions and replace them with the originals.

The best RDR2 mods you can download right now

Of course you can make Arthur The Joker. Alright, so we’d have preferred a Wild West take on Heath Ledger’s Ace of Knaves, but we guess Joaquin Phoenix’s clown is a smidge more timely. The Arthur Morgan as The Joker mod re-textures the cowboy’s face, turning him into a surprisingly believable take on Arthur Fleck – even more so if you pop to Saint Denis and garb your outlaw in a fetching red suit and yellow waistcoat combo. Sadly, towering flights of stairs to boogie down are rare in New Hanover, but you can skip up and down some flights in the mining town of Annesburg if you want to recreate 2019’s most iconic movie scene.

Red Dead Redemption 2 is one of the best (if not the best) games of the last five years. But seriously, we can all agree that snowy prologue is just a teensy bit slow, right? If you want to skip the drawn-out opening act, and skip right to the far more action-packed second chapter, download the RDR2 Intro Completed Save File mod. This time-saving tinker does exactly what it says on the tine. Namely, letting you skip past Arthur’s frigid, Hateful Eight-inspired opener. To make it work, place the modded files into the following folder on your PC…  C:\Users\<name>\Documents\Rockstar Games\Red Dead Redemption 2\Profiles.

Play as any animal

Hot damn is this something else. Download the Model Swap mod, and you can pretty much play as any animal – and a variety of NPC characters – from Rockstar’s sandbox classic. Whether you want to fly through the skies as a Canadian goose, leisurely swim around Lake Isabella as a sockeye salmon or potter around Valentine as a best of all the boys collie, your Doctor Dolittle prayers have come true. Check out this RDR2 mod list for the full selection of beasts and background characters you can possess. Just a quick word of warning: performing certain acts – like drinking a potion – will make critters wildly flap their limbs. Ah well, at least every animal speaks in Arthur’s dulcet western drawl. Just wait until you hear a Carolina Parakeet question Dutch’s leadership.

Pipe in music from RDR1

As wonderful as Red Dead Redemption 2’s soundtrack is, the original Redemption’s score is arguably even better. If you want to relive Woody Jackson and Bill Elm’s mournful and majestic musical triumph, use the Red Dead Redemption One Sound Files mod to pump music from John Marston’s adventure directly into Rockstar’s epic prequel. Tracks include the wistful ‘Exodus in America’ opening as John begins his bounty hunt by stepping off a ferry, and the ambient eeriness of Beecher’s Hope background theme. God, now we’re picturing that moment on Marston’s ranch. Damn you, amazing old music.

Nude mod (and play as any character)

May Cowboy God bless and look over Lenny's Simple Trainer mod. With it installed, you can access and play as literally of thousands of character models… including some who couldn’t afford clothes. “U_M_M_ValPoopingMan_01” and “U_F_M_RhdNudeWoman_01” are two such completely starkers characters. There’s also the mythical missing princess you can adopt the skin of by typing “CS_PrincessIsabeau” into the “models” line of the mod’s Ist.ini file.

There are already a bunch of super purdy Old West reshades on Nexus Mods, and at time of writing, RDR2 Photorealistic Reshade is the most popular. While some people think altering a studio’s artistic vision is an unforgivable skin, virtual outlaws who just want to see Rockstar’s Western through a slightly different colour palate a look. Colours, shadows, tonemapping and overall sharpness are all tinkered with, lending the Western epic an even more unique, filmic look. If you don’t dig the changes, simply uninstall the mod and go back to the incredibly pretty original.

Adjust FOV with a widescreen mod

Not everyone uses a 16:9 monitor. If you’re playing the cowboy classic in 21:9 aspect ratio, the RDR2 FOV Widescreen Mod is a game-changer. With this handy fix, you can remove black bars from cutscenes, cinematic viewpoints, shop menus, and other areas of the game that crop the edges of the screen at a 3440x1440 resolution. Considering just how important RDR2’s brilliantly told story is to the overall experience, this black bar-kiboshing mod is an essential download for Red Dead fans playing on UltraWide monitors.