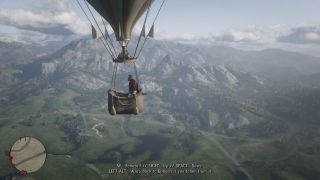 Ever wished you could take in the grandeur of Red Dead Redemption 2 from the comfort and safety of a wicker basket hanging from a fire-filled balloon, and do it whenever you like? The Red Dead Redemption 2 hot air balloon mod is your ticket to the skies, like a Jules Verne protagonist but with more yeehaws.

Not to get too spoiler heavy, but there already was a hot air balloon in Red Dead Redemption 2 - this mod simply gives you the ability to spawn it wherever you like and control it yourself. That means you can take an aerial tour of any part of Red Dead Redemption 2's sprawling open world, and see all of the old west from a new perspective. The mod works with both mouse and keyboard and gamepad controls, and as of the most recent update (which is still version 0.2, so expect some bugs) the balloon has smoother movement and inertia.

As is the case for all Red Dead Redemption 2 mods, you can only turn Arthur Morgan into a ballooning extraordinaire in the PC version of the game. To make the mod function, you'll need to already have Script Hook RDR2 installed then drop the file from Nexus Mods user KranK into your game folder.

Once that's all good to go, you can enable the controls for the balloon by pressing F8 in-game. All the controls should be pretty intuitive, aside from using Left Alt to warp into the last balloon you spawned. That's a good one to remember in the somewhat likely event that you, say, fall out of your balloon while it's a thousand feet in the air.

You'll want the best performance possible to enjoy those aerial views. Make sure you get it with our guide to the best Red Dead Redemption 2 PC settings.