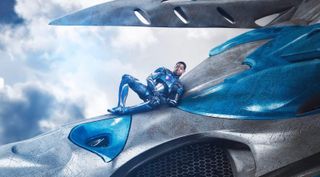 We're still waiting on our first bit of footage for the Power Rangers movie, but in the meantime Lionsgate have unveiled five new character posters that show our heroes posing with their Zords.

For the uninitiated, Zords are the weapons piloted by the Rangers that can be combined to form a Megazord. I wouldn't be surprised if we get a small hint of that capability when the first trailer debuts, but for now we can just admire the  awesomeness that is Blue Ranger's poster. That is one super chilled out pose.

Directed by Dean Israelite and starring Naomi Scott, Dacre Montgomery, RJ Cyler, Ludi Lin, Bryan Cranston, and Elizabeth Banks, the Power Rangers movie will be released in UK and US cinemas on March 24, 2017.