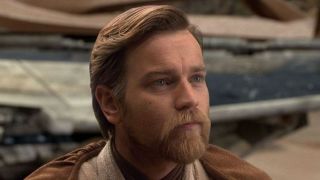 Reports have claimed that the Obi-Wan Kenobi series set at Disney Plus is being put on hold "indefinitely" as the filmmakers retool the scripts. But, fear not, as Ewan McGregor is staying on as the titular Jedi master, while Deborah Chow (who helmed an episode of The Mandalorian) is still set to direct.

After rumors that the Disney Plus series had been canceled were shut down last week, it seems there might've been a small kernel of truth at their center. Sources at THR say the production delay concerns the scripts and story, which are being scrapped as Disney and Lucasfilm look for a new writer and story drafts. The series will, as a result, reportedly take on a four-episode structure instead of the six episodes as originally planned.

Apparently, the issue with the story might come down to its relative similarity to another Disney Plus series. There was alleged concern that Obi-Wan's protective relationship with young Luke Skywalker could be seen as thematically similar to Din Djarin taking care of "The Child," AKA Baby Yoda, in The Mandalorian.

However, speaking to IGN after the initial reports were made, McGregor addressed the delays and dampened the severity of the problems. "It’s just slid to next year, that’s all," he said. "The scripts were really good. I think now that Episode 9 came out and everyone at Lucasfilm's got more time to spend on the writing, they felt like they wanted more time to spend on the writing."

"I’ve read about eighty, ninety percent of what they’ve written so far, and it’s really, really good," he continued. "Instead of shooting this August, they just want to start shooting in January, that's all. Nothing more dramatic than that. It often happens in projects, they just wanted to push it to next year. It will have the same release date, I don’t think it will affect the release date. They're still shooting towards having the film [show] release when it was going to be originally."

Collider was the first to report on the delay, with sources say the production crew on Obi-Wan Kenobi have been sent home from Pinewood Studios in London. They hope that the production will resume by Summer. As with anything in this business, there's a good chance things could run late of that timeframe.

While we collectively dry our tears over the hold on Obi-Wan Kenobi, let's look forward to the best new TV shows of 2020 and beyond.