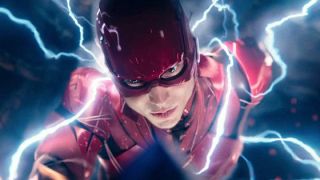 New York Comic Con 2017 might be over, but we still have the trailers to remember it by. We know you're busy though so if you spent the weekend going out and having a life you might have missed some. Don't despair though because you can catch up now with our round up. From the first Pacific Rim Uprising trailer to the latest Justice League look, you can find every trailer, teasers, and clip released at NYCC below. You're welcome.

Read more: Watch every SDCC 2017 trailer in one place

The Justice League are back in action in the latest trailer for the superhero team-up and you can feel Joss Whedon's influence. Superman makes an appearance (although only in Lois's dreams) and the rest of the crew are wise-cracking and fist-pumping throughout.

The Walking Dead revealed a scene from season 8 at NYCC and keen fans will notice that it mirrors the series' first episode where Rick is walking discovering what's happened around after waking up from his coma.

John Boyega stars as Jake Pentacost, son of Stacker Pentacost from the first film (and made exceptionally cool by Idris Elba). The Jaegers are sweet, the Kaiju are mean, the fights are gargantuan. It looks like everything you'd want in a sequel.

This two-minute trailer for the new season of The X-Files will give you goosebumps as Mulder and Scully return to save the world.

Keanu Reeves’ turned up at NYCC to reveal the first trailer for his upcoming sci-fi thriller Replicas. With a distinctly Blade Runner feel to it and co-starring Star Trek's Alice Eve this could be one to watch for hardcore sci-fi fans.

Hulu's new series Castle Rock got its own NYCC debut with the above trailer and although it doesn't give much away it teases its Stephen King influences with a shot of the Shawshank prison logo.

New sci-fi anthology series Philip K. Dick’s Electric Dreams is already showing in the UK - you lucky things - but Amazon has grabbed the rights for the US. The ten standalone episodes don't have a stateside release date yet, but you can watch the trailer above.

The latest show pony from the Marvel stable has a fun twist - it focuses on the children of supervillains. The gang of parentally-disadvantaged teens includes a witchy goth, a lacrosse player, and a model and their shady parents are part of a group called The Pride. Even better, Spike from Buffy himself plays Victor Stein, one of the bad dads. The show will air on Hulu from November 21.

The Hunger Games' Josh Hutcherson is back in this new Hulu show, which sees him recruited to save the world by characters from his favourite video game.

The Man in the High Castle season 3

Another first look from Amazon Prime comes with this clip for The Man in the High Castle season 3. Featuring Rufus Sewell’s John Smith, it teases what we can expect from the third season of the alternative world series.

If you haven't had enough of the Jack Ryan movies, Amazon Prime is bringing you a TV adaptation starring John Krasinski in 2018.

Hulu continues its NYCC reveals with a teaser for the second season of Shut Eye.

The Tick is already here but that didn't stop Amazon Prime from releasing a trailer for the season part of the first season at Comic Con.