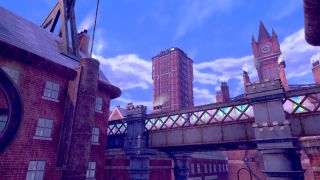 The theory goes that alongside Galar, Pokemon Sword and Shield could also include at least one other region, namely the Kalos region from Pokemon X and Y. Now that might sound like madness, but as Dexerto explains, there's actually some logic to the argument.

As part of the Pokemon X and Y story, you discover that a 3,000-year-old king once used something called an ultimate weapon to stop a war that raged in Kalos. It utilized energy from the legendary Pokemon Xerneas and Yvelta, which actually meant that it led to the creation of Mega Evolutions. What's interesting though is that the war was with an unknown region, which the theory posits could be Galar.

It helps that Galar is based on the United Kingdom, whereas Kalos is based on France, and there have been just a few wars involving both countries.

Also interesting is that Pokemon X and Y featured a train station in Couriway Town, which you could never access. However, trains are a prominent feature of the announcement trailer for Pokemon Sword and Shield (which you can watch below), so it could be that the train stations connect across the two regions, just like the Eurostar between the real countries of France and the UK. Plus, Couriway's slogan is "a town connecting differences". Were Pokemon X and Y really foreshadowing this connection back when they launched in 2013?

Redditor Qaboi also raises the point that "Pokemon X and Y was slightly unfinished. They are the only main games in the series to never get a remake/sequel. There are few areas in the game that are inaccessible and there are some items that haven't seen any use."

How to get Meltan in Pokemon Go and Pokemon Let's Go

They're also the last games in the series that use the traditional gameplay mechanics like the gym battling - Pokemon Sun and Moon introduced quite different elements from the main series, and Pokemon Let's Go was a Pokemon Yellow remake with Pokemon Go mechanics - which could actually link them more closely to Sword and Shield.

If you really want to raise a bit of a head scratcher, in Melmetal's Pokedex entry - one of the few confirmed Gen 8 Pokemon aside from the starters - it states that the mythical Pokemon was last seen 3,000 years ago. The same time as the war between Kalos and this unknown other region. Could it really be Galar?

Now, technically developer GameFreak and The Pokemon Company itself have only announced the brand new Galar region as the setting for the upcoming titles, but that doesn't mean that it couldn't actually happen. Plus, even if Kalos doesn't appear in Pokemon Sword and Shield, it could well be connected to Galar in the lore, which is exciting regardless.

If you're excited about Pokemon Sword and Shield, why not check out our pick of the best upcoming Switch games for 2019 and beyond?