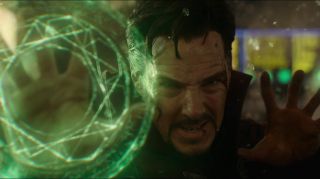 We're just three months away from Doctor Strange - the final comic book movie of 2016 - and while we've gotten two trailers for the film the footage we've seen hasn't really emphasised the importance of the Eye of Agamotto, one of Strange's most powerful accessories. Thanks to a new image (via Reddit) we have a fresh look at Strange's fancy jewellery in action, and you can check it out below...

Back in 2015, Marvel President Kevin Feige explained the significance of the Eye to Entertainment Weekly: "In this film, the Eye is a very important relic that can be quite dangerous if used in the wrong hands, because it has the ability to do any number of things, the most dangerous of which is, it can sort of manipulate probabilities. Which is also another way of saying, ‘screw around with time’ — which is part of our story".

The "screw around with time" portion of the quote has had fans of the MCU speculating that the Eye of Agamotto also doubles as an Infinity Stone - specifically the Time Stone, which happens to be green - and this pic certainly seems to give credence to that notion. If that's the case, I would not be surprised if Thanos - who did the unthinkable and got off his space chair at the end of Avengers: Age of Ultron - makes an appearance at some point during Doctor Strange.