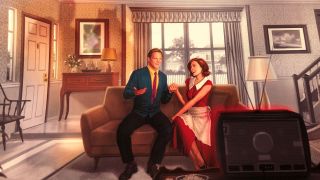 The upcoming Disney Plus show, Marvel's WandaVision, already sounded wild – but Vision actor Paul Bettany has certainly confirmed as much. Speaking at Sundance Film Festival (via The Playlist), the actor called the series "f***ing bonkers", adding: "I mean, it's so out there, and nuts. Fans will not have to wait that much longer. They'll get much more of an insight very, very soon."

The Disney Plus series – which centres on Scarlet Witch (aka Wanda Maximoff) and Vision – is one of the more curious new projects that Marvel has brewing. Talking to Yahoo Entertainment at Disney's D23 event, WandaVision co-star Elizabeth Olsen confirmed that the series is actually a sitcom, at least in part. Bettany then chimed in: "That’s how it begins and it moves into more familiar epic territory later. But it’s absolutely a mash-up of sitcoms."

We also know that at least a portion of WandaVision will be set in the 1950s, which complicates the story we know the main characters are involved with in the present day. So we're getting a 50s-style sitcom/Marvel epic hybrid with time-jumps starring two largely supporting roles from the MCU, and now Bettany is calling it effing bonkers? Colour me intrigued.

We don't know a whole lot else about the upcoming Disney Plus series, but, according to Bettany, it won't be long before we do. Better yet, the series recently had its release window moved from 2021 to 2020, meaning we're only months away from learning what all the fuss is about.

From the Black Widow movie to The Eternals, here's everything we know about Marvel Phase 4.