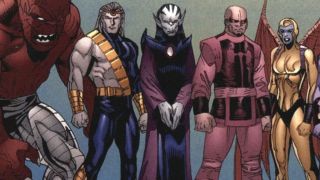 The Eternals are set to battle their greatest ever enemies on the big screen later this year: the Deviants. The villainous group has served as the group’s primary antagonists throughout their comic history, and will do likewise in the Marvel Cinematic Universe.

Below, we delve into who the Deviants are, providing you with a rundown of their powers and whether they may have appeared in the MCU before. However, if you're not sure who the Eternals are, then fear not, as we've already covered who our heroes are in a separate piece.

Who are the Deviants?

The Deviants’ history dates back as far as the Eternals’ and, strangely, humanity itself. Their existence is down to the Celestials, a group of extremely powerful cosmic beings who possess the ability to create and destroy life.

The Celestials visited Earth millions of years ago when humanity’s ancestors roamed the globe. Ziran the Tester, the Celestials’ geneticist, experimented on a group of primates and created the Deviant subspecies. This initial visit is known as the First Host event and, at other points throughout history, the Celestials returned to Earth to monitor each species’ progress and modify them if necessary.

Unlike the Eternals (who are attractive, immortal beings) or ordinary humans (who are genetically balanced), the Deviants are abnormal. They’re often referred to as “the changing people” due to mutations in their DNA – mutations them leave the Deviants with odd coloured skin and other deformations. No two Deviants are alike, and those considered too mutated, or not mutated enough, are exiled or killed. The Deviants’ jealousy over the Eternals’ physical beauty and defined superpowers has locked the two species in a never-ending war – a millennia-long battle that is certain to form the plot of the MCU movie.

A religious species, the Deviants revere the Dreaming Celestial. Also known as Tiamut the Communicator, they believe he was the one who created them and will allow them to inherit the Earth. Tiamut is said to have been the only Celestial who voted against destroying the Deviants’ empire during the Second Host – more on that later – before he was exiled and buried underneath what’s now known as California.

The Deviants are also thought to have been created as a delicacy for the Celestials to feast upon during their Earthly visits. It’s a story told by one Deviant during the Eternals’ 2006 miniseries, though, and there’s no concrete proof for this.

What are the Deviants’ powers and abilities?

Unlike the Eternals, the Deviants aren’t necessarily blessed with superpowers. Some don’t possess any at all, and those who do are still weaker than their sibling species. Deviant abilities include shapeshifting, accelerated healing, fire breathing, immortality, matter transmutation, superhuman speed, superhuman strength and mesmerism.

If there’s one thing that all Deviants have, however, it’s their intellect and mutation factors. Their genetic makeup causes them to evolve faster than humans, so they’ve built cities and advanced as a species, such as discovering genetic engineering, quicker than humans. This rapid progression enabled them to control Earth tens of thousands of years ago, enslave humanity, and build an empire co-ordinated from their capital city of Lemuria.

Their dominion ended when the Celestials returned to conduct their Second Host. The Deviants, believing they could overthrow their creators, attacked the Celestials’ ship but were beaten back. As punishment for their insolence, the Celestials bombed Lemuria and destroyed their empire. Defeated, the surviving Deviants retreated underground and into caves – environments they’ve inhabited ever since whilst they’ve plotted against the Celestials and Eternals.

In the Marvel comics, the Deviants were first introduced by Jack Kirby in July 1976. After his attempts at creating a Fourth World saga at DC Comics failed, Kirby re-joined Marvel and fashioned his DC ideas into the Eternals. The first entry in this brand-new Marvel series also saw the Deviants make their debut, but the franchise was cancelled in January 1978 before Kirby could finish his story.

The Deviants have shown up in other Marvel franchises including The Avengers and Thor, as well as subsequent rebirths of The Eternals in October 1985, August 2006, and August 2008. The Deviants have never had their own standalone series, which makes sense due to their position as enemies of the Eternals, the Avengers, and others.

Prominent members of the Deviants have included Lemuria warlord Kro, a Deviant who is also the ex-lover of the Eternals’ Thena, Deviant Head Priest Ghaur, and former Deviant Monarch Brother Tode, who was killed by the Eternals using molecular reassembly. There are also examples of hybrid Deviants, such as Deviant-Inhuman Maelstrom, who are major threats to the Eternals and other Marvel heroes due to the cross-species abilities they possess.

Have we met the Deviants in the MCU?

Technically, yes. Thanos, Marvel’s big bad, is an Eternal-Deviant hybrid. His purple skin and scarred face are proof of his Deviant lineage, but the fact that the Mad Titan possesses numerous superpowers – and could wield the Infinity Stones – is also evidence of his Eternal bloodline. He was born on the Saturn Moon of Titan to the Eternals’ A’lars and Sui-San but, thanks to a Deviant gene, developed “Deviant Syndrome” and became the universe-ending threat we know him to be.

The Skrulls, who appeared in MCU movies such as Captain Marvel and Spider-Man: Far From Home, are also technically Deviants. Unlike their Earthly cousins, though, the Skrulls became the dominant race on their home planet of Skrullos. Their ability to shapeshift allowed them to wipe out Skrullos’ Eternals and Skrull Prime races in the comics, and led to the Skrull empire’s formation and the beginning of the Kree-Skrull war – an ongoing conflict that formed the backbone of the Captain Marvel movie.

What role will the Deviants play in The Eternals movie?

Like in the comics, the Deviants will be the primary antagonists in the Eternals’ movie. We know from the movie’s synopsis that the Eternals are forced out of hiding after a tragedy strikes Earth. Given that the flick takes places after Avengers: Endgame, this tragedy will be Thanos wiping out half of all sentient life in the MCU at the end of Avengers: Infinity War.

It makes sense that the Eternals would come out of hiding after the Snap. With the Avengers disbanded following Endgame’s climax, a new superhero group needs to protect Earth from cosmic threats. That will be vital with the Deviants expected to emerge from the shadows. They’ll see that Earth’s Mightiest Heroes are no longer around to stave off possible attacks, so they’ll view this as the perfect opportunity to reclaim the Earth.

Marvel Studios will likely use the Eternals Volume 3 – the 2006 limited series co-created by Neil Gaiman and John Romita Jr. – as the movie’s chief inspiration, so we could see Deviants including Gelt, Morjak, Dzyan, Kra, and Ghiough show up. Other well-known Deviants such as Kro and Ghaur could also appear but, without confirmation from Marvel about Deviant casting choices, we’re unsure who may turn up. The Visitor’s Haaz Sleiman has been cast in an undisclosed role, but it remains to be seen if he’ll appear as a Deviant.

We may also get a brief origins story about the Deviants’ creation too. Concept art of the Celestials was revealed last year, so we might get a synopsis of how the Deviants and Eternals were made before we pick things up in present day after the events of Endgame.

Want more Marvel in your life? Then check out everything you need to know about Marvel Phase 4.