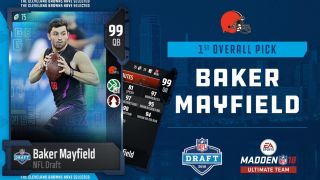 The first round of 2018’s NFL Draft is in the books – and with impressive speed EA has already made all 32 players available in Madden 18 Ultimate Team. It means, for instance, that five fresh quarterbacks are immediately available for you to flesh out your fantasy roster. Just in case you slept through the entire thing, they are Baker Mayfield (Cleveland Browns), Sam Darnold (New York Jets), Josh Allen (Buffalo Bills), Josh Rosen (Arizona Cardinals), and Lamar Jackson (Baltimore Ravens).

Mayfield’s status as the first overall pick unsurprisingly makes him the best new player available, with an OVR of 99 on his 'Future Star' card. That may seem like an outrageous rating, but we’re already at the end-game stage of Madden 18 with its successor, Madden 19, due in August – so it’s inevitable that this draft class feels a touch overpowered. Expect more realistic MUT attributes ahead of next season’s campaign.

First-round running back options aren’t quite as plentiful as signal callers, but there are still three for you to select from should you have sufficient in-game coinage: second overall pick Saquon Barkley of the New York Giants, plus Seattle Seahawks’ Rashaad Penny and New England Patriots’ Sony Michel.

Below are the key 'Future Star' card ratings for the quarterbacks and running backs mentioned above, plus other notable names from the first round – such as the first players selected at cornerback (Denzel Ward, Cleveland), defensive end (Bradley Chubb, Denver) and wide receiver (DJ Moore, Carolina). All have more affordable 'Rookie' cards in the game too, which are generally rated 10 OVR points less than the 'Future Star' version.

Madden 18 is out now on PS4 and Xbox One. Already looking ahead to next year’s game? Then check out our countdown of the 10 athletes most likely to make the cover of Madden 19.