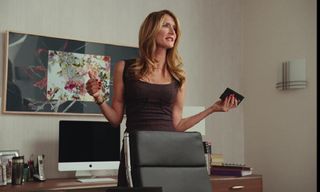 Dern won for her role as perpetually styling divorce lawyer Nora Fanshaw, who gave us some of the year's best quips about marriage, love, and gender dynamics.

Accepting the award, a tearful Dern said: "Noah wrote a movie about love, and breaking divisions in the name of family, home... and hopefully our planet. Some say never meet your heroes, but if you're really blessed then you get them as your parents."

Dern's parents are actors Bruce Dern and Diane Ladd. She went on to say, "Thank you all for this gift. This is the best birthday present ever.”

The night before the Oscars, Dern was honoured at The Spirit Awards with a video tribute and a chorus repeatedly singing her name. She had, by anyone's standards, an incredible weekend.