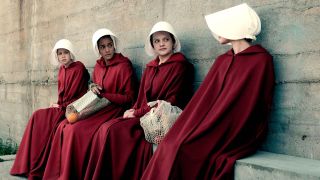 So here I am, deep into the second seasons of The Handmaid’s Tale, Glow and Luke Cage, and I find myself not exactly thrilled to be settling down for evenings in front of the telly.

I’m part of the problem: the moment the credits rolled on The Handmaid’s Tale, I, like everyone else, mourned that such a superb show had ended. The instant it was announced that a second season had been greenlit, I, like everyone else, rejoiced. Sure, Margaret Atwood’s source novel was all used up, but the showrunners had done such an intelligent job of modernising it and making it relevant, I was certain they’d ace it. Well, season 2 is good... but good ain’t enough when it follows great.

Most shows’ second, third, ad nauseum seasons aren’t even good. The trouble with TV is no one knows if the first season will be a hit. When it is a success and a sophomore season is then rushed into production, it feels... well, rushed.

What made the first outing so fresh – female wrestlers in the ’80s! – is now a given, and follow-up seasons, like so many movie sequels, either just about do the job (Jessica Jones), turn ever-decreasing circles (The Walking Dead), lose relevance (Homeland), or nosedive spectacularly (Heroes).

The most exciting new TV shows coming in 2018

There are, naturally, exceptions to the rule – note the headline says 95 per cent – and these are the finest shows ever made: The West Wing, The Sopranos, The Wire, Breaking Bad, The Shield, Six Feet Under, Mad Men, Friday Night Lights, to name a few. They widen scope, deepen drama and characters.

The likes of Friends, Seinfeld, and Modern Family, meanwhile, prove that sitcoms can stay scalpel-sharp for years, while Black Mirror and Inside No.9 are endlessly inventive anthology series. But the majority of renewals? Unnecessary. For every Billions, Game of Thrones or Better Call Saul (to use three still-live examples of shows that continue to be ace), there are 100 ‘entertainments’ that feel like a chore, and all we can do is watch with sadness (or choose to not watch at all) as something once-great, like Peaky Blinders, begins its slide into mediocrity.

So consider this: when Netflix alone is airing 700 original TV series in 2018, why support the stale shows? Better to discover shiny new treasures... and then move on again. Or is it just me?

Is it just me, or was it better seeing trailers for the first time at the cinema?

Is it just me, or are the best sequels belated ones?

Is it just me, or were movie stars better before social media?