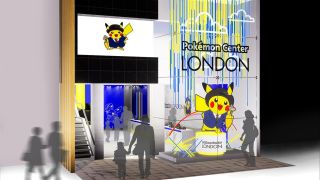 Today the Pokemon Company announced that a Pokemon Center pop-up store is coming to the United Kingdom for four weeks this October. Pokemon Centers are franchise-specific shopping destinations that offer tons of exclusive merch and hold in-store events.There are currently Pokemon Centers in the US, Singapore, and Japan, but this UK-based shop will only be a temporary fixture, like the one in Paris that opened for three weeks back in 2014.

It's happening, Trainers! 🛒Pokémon Center London 📍 Westfield London, Shepherd's BushPopping up for a limited time only this October. Further details will be revealed in the coming months! pic.twitter.com/pp9fTg1d9dAugust 5, 2019

The London-based Pokemon Center will be located in the Shepherd's Bush Westfield location and will open on October 18. It’ll remain open until November 15.

So far, there’s no other information about the UK-based store regarding what kind of exclusive wares it will offer, pricing, or opening hours, but there is a mock-up of the storefront and a very cute picture of Pikachu wearing a bowler hat. Bowler hat Pikachu is also carrying a fancy umbrella with a wooden handle featuring a carving of Psyduck (here’s hoping that’s available for purchase).

The Tokyo-based Pokemon Center features uniformed greeters and merchants who walk the aisles peddling Pikachu hats. The store’s swag includes plushies, action figures, cereal boxes, and themed cups of soup. Maybe the UK one will have cans of Pokemon baked beans? If so, put me down for 50.

Pokemon Sword and Shield will be released exclusively on the Nintendo Switch on November 15, 2019.

Want to know all about the new Pokemon you’ll be able to catch? Check out our Sword and Shield Pokedex List.