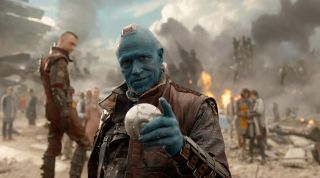 Gunn dropped the detail as a correction to a ScreenRant story that originally said there were four credits scenes. It's not just quick gags, either - apparently at least two of the five scenes will feed into future Marvel Cinematic Universe happenings. No word on whether any of them will show Drax the Destroyer in a bathrobe urging audiences to go home, or if Deadpool has already cornered the market on Ferris Bueller parodies.

At least one of those scenes had better show the continued adventures of Howard the Duck, since we haven't seen him since he was introduced to the MCU at the end of the first Guardians of the Galaxy. That's assuming he doesn't show up as a prominent character in the events of the main film, of course, which would be preferable.

Directed by James Gunn and starring Chris Pratt, Zoe Saldana, Dave Bautista, Vin Diesel, Bradley Cooper, and Kurt Russell, Guardians of the Galaxy 2 hits cinemas on April 28 in the UK and US theaters on May 5.

For more galactic adventures, read our news round-up on Guardians of the Galaxy 2 and check out some early audience reactions to the movie.