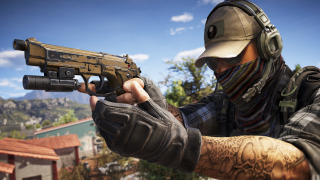 A new Ghost Recon game will be revealed on Thursday, and it's already tied in some way to Ghost Recon Wildlands. The Ghost Recon franchise's official Twitter account confirmed the "Skellcon" teaser that players found in the new Operation Oracle missions will in fact be a reveal event for a new entry in the series.

Calling all Ghosts.Tune into the #GhostRecon World Premiere event May 9 at 11:30 am PT.❤️ this Tweet to watch the Official Announce Trailer on May 9! pic.twitter.com/n7emQ6M0p7May 6, 2019

The announcement sets the reveal event for Thursday, May 9 at 11:30 am PDT / 2:30 pm PDT / 7:30 pm BST. That's the same day as PlayStation's next State of Play broadcast, and Sony did tease that it will show off at least one unspecified game there (it could just be a coincidence, of course). You can catch the Ghost Recon event on the series' official Twitch channel, embedded below.

Though Ubisoft's announcement stops short of confirming the new announcement will be a direct sequel to Wildlands - there were all kinds of Ghost Recon games before Wildlands brought the series into the open-world fold - it will likely tie in somehow. Wildlands was a commercial success and Ubisoft has been leaning hard into open-world games, so I doubt Ubisoft would be quick to point the series back toward a sequential line of single-player missions or strategy spinoffs.

I dream that a followup to Ghost Recon Wildlands would take the game deeper into the weird territory it started exploring in that limited-time Predator crossover mission. Imagine finding out that all of the drug cartels you were hunting in the first game are actually run by aliens, giving your squad no choice but to team up with Earthling cryptids like Bigfoot and the Chupacabra to take them down. It could still happen, I guess. Who's to say Skell Tech hasn't secretly been an extraterrestrial shell corporation this whole time?

See what else is on the way with our extensive look at new games 2019 Or see what's on the way in games and entertainment just this week with our latest Release Radar video.