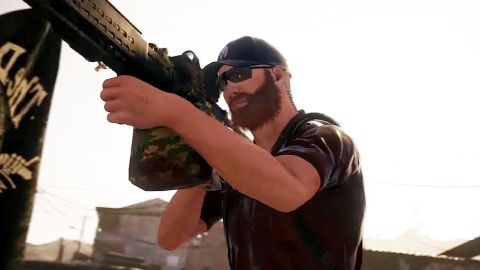 A stunning open world, brutal combat, and deep customization combine to bring Ghost Recon roaring back from the dead.

It’s hard to believe that the first Ghost Recon title is over a decade and a half old, and it’s equally shocking to think that it’s been nearly five years since the most recent entry, Ghost Recon: Future Soldier. Other Tom Clancy titles have helped fill in that gap, but the typically excellent Ghost Recon sub-franchise has laid dormant. With Wildlands, it’s most certainly back, but it’s almost unrecognizable. Surprisingly, that’s not nearly as dire as it might sound.

Like most of the Ghost Recon series, Wildlands throws you into a troubled, war-torn land that is absolutely overrun with bad guys who need to be dispatched as efficiently as possible. This time around the action takes place in the South American country of Bolivia. Plenty of artistic liberty has been taken with both the landscapes and politics of the region, but the game does its best to fit the story arc into something resembling modern-day world affairs. Thankfully, you’ll be too busy flying helicopters, rescuing rebels, and sniping heavily armed cartel members to care how well it pulls that off.

From the very first seconds of initial mission it’s made clear who your final target is: El Sueño. El Sueño is the top boss and leader of the Santa Blanca cartel, which holds control over the entire region thanks to the massive wealth generated by its thriving cocaine business. Every single thing you do in Wildlands is ultimately just another small step towards finally taking El Sueño down, and even if you pause your story missions for a bit to take care of some side quests, those objectives are still linked to the overarching goal of putting ‘the Boss of Bosses’ six feet under.

Wildlands is an open-world game in every sense of the word, with complete freedom of movement and frequent clashes with both cartel members and nefarious local law enforcement, which also happens to be extremely corrupt. You’re given total control to approach each objective the way you want, whether that means stealthily stalking a jungle hideout while sniping militants or driving a farm tractor into a military base and lobbing grenades at everything that moves. Sometimes stealth is necessary to survival, but other times doing your best impression of Rambo is not only extremely effective, but also a whole lot of fun.

The singular goal structure is really what helps Wildlands separate itself not just from the rest of the Ghost Recon franchise but also from most other story-based open world games. The overworld map is like a directory of the smaller players in the Santa Blanca cartel, and each one has to be taken down in order to make progress, but it really doesn’t matter what order you do it in. Some of the areas of the map might have more enemy reinforcements, heavy units, or simply better tactics than those elsewhere, but there’s no arbitrary walls or invisible barriers stopping you from heading anywhere you want on the massive map.

If you’re playing alone you’re given a compliment of three AI partners. They’re not terribly smart, but they’re definitely useful, and can be commanded to follow orders with reasonable accuracy. However, the game is really meant to be played with friends, and that’s made apparent once you add another player to your squad. As soon as a second human is present, all of your AI partners disappear, taking you from a four-man squad to a duo. Still, two human players are usually enough to carry out just about any mission in a few tries, so it’s not exactly game-breaking, but it’s also never really explained. The only glaring issue is that even after the AI soldiers disappear, they continue to chat and make small talk while traveling around the map. At one point I had just two player-controlled female soldiers in the car, but the drive to the next objective came with a humorous chat between two dudes.

8 things I wish I knew before starting Ghost Recon: Wildlands

Customization is another huge strong point for Wildlands, and it’s clear that Ubisoft took many of the criticisms of The Division’s cookie cutter protagonists to heart because there’s an absolute wealth of ways to tweak how your character and weaponry look and behave. Your warrior can be as intimidating or ridiculous looking as you want him or her to be. A friend I teamed up with was decked out in full black tactical gear, while I chose white cargo pants, an orange plaid shirt, blue camo backpack, ski goggles, and cowboy hat. The best part is that the cutscenes are rendered using your in-game characters, so watching my ponytailed gal talk shop with other deadly agents while gazing through a pair of shiny, pointless ski goggles really made the entire experience worthwhile.

That level of customization extends to your weaponry. There are dozens and dozens of guns to find in the world and add to your loadout, and each of them has a number of different components that can be swapped out. New barrels, sights, scopes, triggers, grips, launchers, stocks, and other bits and pieces are littered throughout Bolivia, and if you’re a completionist you’re going to want to rethink things a bit. Oh, and each individual component can have its own color scheme, too, in addition to the full-gun paintjobs available to choose from. This is a very, very deep game.

Actually using the guns is a similarly blissful experience. Assault rifles like the M4A1 and AK-47 will quickly become your new best friend, and they’re extremely useful in just about any scenario. More specialized weapons, like sniper rifles or sawed-off shotguns, are either dreadful or a godsend depending on the specific scenario. If you find yourself in a long-range engagement with just shotgun ammo left in your reserves, your options become quite limited. Firefights feel tense and you’ll find yourself repeatedly toggling between the aim-down-sights and over-the-shoulder firing modes as you hop between the various types of cover and swap between weapons. Each firearm behaves slightly differently in battle, and each component can further modify that behavior. Learning the recoil patterns and managing the ammo capacity of a gun makes it a much more efficient killing machine, but branching out to new weapons never feels like you’re deliberately hindering your own effectiveness, which is a big plus.

As you collect new guns and accessories and use them to take down terrible people you earn experience points which can then be spent, along with credits you get for aiding the friendly local rebels, on upgrades to your soldier. These can range from new abilities like a deployable parachute to more stamina and health. Many of the skills have several levels, but the skill tree itself is fairly short. That’s not really a drawback, however, as it allows any soldier to be good at just about everything, which is crucial during solo play.

The sense of scale in Wildlands never ceases to impress, but that ambition can also cause some headaches. The world map is absolutely massive, and although the exact measurements haven’t been revealed, it’s clear that it puts Grand Theft Auto 5 to shame. That’s a heck of an accomplishment, especially when you get a glimpse of the variety of environments Ubisoft managed to cram into this make-believe Bolivia, There’s salt flats, jungle, desert, tundra, grasslands, and everything in between, with no loading screens or stops. Unfortunately, while the game looks really impressive (on a standard PlayStation 4 even), the framerate can get a bit choppy during particularly hectic scenes. Battling a dozen soldiers? Everything is smooth. Add in a couple of helicopter explosions, a few waves of reinforcements, and a herd of 30 llamas kicking up dust in the glare of car headlights and suddenly things start to slow down a bit.

That brings me to my only real issue with Wildlands: it’s too ambitious for its own good. Ubisoft has repeatedly said that this is the biggest open world game it’s ever made, and it truly is a stunning achievement as a final product, but the sheer size and depth of every aspect of the game has left many, many crevices for bugs to creep in. It’s not just the phantom AI soldiers having conversations in your ear. It’s the fact that the radio and NPC conversations aren’t synced for both you and your real-life co-op partners, the surprisingly frequent glitches that prevented me from reviving my allies in battle, and the bug that made me appear to my partners to be running behind every car I hijacked, when I was clearly in the driver’s seat on my own screen.

None of those recurring glitches or other, one-time bugs I experienced were game-breaking, and most of the time they resulted in a fit of laughter rather than any actual frustration, but they’re definitely present. Still, it’s hard to look at those shortcomings as anything other than the small unwanted side effects of building a game as massive, detailed, and rich as Wildlands is. In fact, Wildlands is so far removed from what most have come to expect from a Ghost Recon title that it could have benefitted from shedding its sub-franchise namesake and simply standing on its own. It’s certainly got the legs for it.

A stunning open world, brutal combat, and deep customization combine to bring Ghost Recon roaring back from the dead.