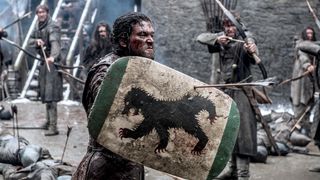 Game of Thrones season 6 will go down in history as having one of the most satisfying season finales of all time. Back it up a bit and it even includes - one episode earlier - one of the most highly-anticipated small screen fights ever. That's the Battle of the Bastards: the major scrap between Jon Snow and Ramsay Bolton. It was a glorious moment and one that's apparently going to be bettered in season 7.

Having a good old chinwag on the Emmy red carpet, Emilia Clarke told TV Line that the upcoming season is so good it's "ridiculous" and that "they topped it." You can watch the full interview below:

Now, I don't know about you, but hearing that practically "every word is a spoiler" is exciting as hell. I realise Clarke's being hyperbolic but still it's fun to imagine what could possibly be happening in the show that's so huge even a brief glimpse at a script would give the game away. I'm hoping Lady Stoneheart's going to make an appearance, or at the very least, Gendry returns from sea.

That battle is the most intriguing piece of info Clarke mentions. Particularly as it's going to rival the superb battle from season 6. With only a couple of seasons left, I've got a feeling Weiss and Benioff are going to mix things up a fair amount. I'd love to see an "epic battle" in the first episode - who's with me?

Game of Thrones season 7 is currently in production and is scheduled to premiere sometime next year.