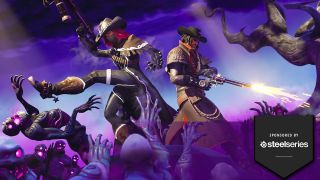 It's now Week 10 of Fortnite Season 6, which means it's now possible to complete all ten of the Fortnite Hunting Party Challenges. This means there's only a week or so left now to wrap up those remaining Fortnite Battle Pass Challenges, to earn the legendary A.I.M. outfit and mop up the other awards available. If you're a latecomer and aren't aware of this type of challenge from previous seasons, it works like this - for each week you manage to finish all seven of the Battle Pass Challenges, you'll receive a new loading screen that hides a clue to lead you to the location of bonus Battle Stars or a unique Banner. Once you figure out where the clue is pointing, you just need to drop in to that location and an extra Battle Pass tier or a new customisation item is yours - bear in mind that you have to complete the relevant Hunting Party Challenge and get the loading screen before you can collect the secret item relating to it, so don't try to rush ahead and go straight to these locations in advance as you'll come up empty handed.

As with similar challenges in previous seasons, you'll need to complete all of the Battle Pass Challenges in seven different weeks in order to unlock the Hunting Party skin. The above posts show what this legendary A.I.M. outfit looks like, and people have feelings about it as a reward.

If you've successfully completed all ten of the Hunting Party Challenges then this loading screen will be yours, featuring DJ Yonder mixing it up at a huge party. Once again, A.I.M. is hiding in the background to the top left, but if you look closely at the speakers you'll also see some grid references written on the side - G8/G9/H8/H9. These gridlines cross southeast of Fatal Fields near the edge of the desert biome, so head there.

When you glide in, aim for the large tree and rock pile on the edge of the desert.

Once you land on the edge of the desert, make your way to where the G8/G9/H8/H9 grids all meet, and the bonus banner will pop out of the ground, giving you one final customisation option for the season.

After finishing nine weeks of Hunting Party Challenges you'll receive this loading screen, showing a flowery meadow and A.I.M. lurking in the background, along with a hidden Battle Star hovering over a BBQ. The area in question is Leaky Lake again, so head there.

Look to the northwest of the main central Leaky Lake island, and you should be able to spot the small red BBQ next to the stream.

Head to the BBQ and the hidden Battle Stars should pop up above it, and collecting them will push you up an extra Battle Pass tier.

After completing the Hunting Party Challenge for an eighth week your reward is this loading screen, showing A.I.M. scanning the scenery after landing on the island. If you've not already spotted their discarded parachute, it's on top of Flush Factory so that's where you want to drop.

As you glide in, head for the roof of the main Flush Factory building - the parachute wrapped around the chimney should make it obvious where you need to land.

Once you reach the roof, the hidden Banner should appear by the smaller of the two chimney columns - grab it and you'll have a fresh customisation option to add to your flag.

Once you've beaten seven weeks of Hunting Party Challenges you'll get this loading screen, showing what may be the final moments of Kevin the cube and hiding a Battle Star on the island in the top right corner. This represents the newly redesigned Leaky Lake area, so drop in there.

Aim for the small island just southwest of the main central Leaky Lake island, and look out for a nearby boat.

Land on the boat and the hidden Battle Stars should appear, so grab them and tick off another Battle Pass tier.

Complete the Hunting Party Challenge for a sixth week to unlock this loading screen, showing a heated battle against the Cube Monsters. Look on the trunk of the tree and you'll see a hidden Banner - perched on top of a statue made of cars. For reference, this is found southeast of the trailer park camp site between Retail Row and Lonely Lodge, so drop in there.

If you approach from the direction of the racetrack, you should be able to easily spot the car statue by the roadside.

Land on top of the statue or build up to it and the hidden Banner will pop up, ready to collect and give you a new customisation option for your flag.

After finishing five weeks of Hunting Party Challenges you'll unlock this loading screen, showing characters leaping around a haunted castle and a Battle Star hidden in one of the towers. This castle can be found directly east of Haunted Hills, so head in that direction.

Aim for the solo tower in the southwest corner of the haunted castle.

The hidden Battle Stars appear by the upper window of the southwest tower - you'll need to build up to it to reveal and grab them.

Finish the Hunting Party Challenge for a fourth week to receive this loading screen, showing another hidden Banner in the background - this time above a giant llama. If you don't know where this is, it's north of Junk Junction so head to that corner of the map.

If you float in over Junk Junction, you basically can't miss the giant llama on the hill above it to the north.

Land on the llama's back and the hidden Banner will appear for you, so pick it up and you'll have a fresh customisation option to use.

After three weeks of completed the Hunting Party Challenges you'll get this loading screen, picturing a werewolf fight outside a cabin in the woods with a Battle Star hovering on the roof. This location is in the east of Wailing Woods, so make your way there.

Approach from above Wailing Woods and you'll see a cabin tucked in the trees to the east side, so go there.

The hidden Battle Stars will appear next to the chimney on the roof of the cabin, so hop up there via the hedge and collect them.

Complete the Hunting Party Challenge for a second week and this loading screen is your reward, revealing a hidden Banner above a stagecoach etched onto a tree. If you're not familiar with it, the stagecoach can be found near the main built up area of Paradise Palms, so aim for that.

Aim for the bend in the road, just north of the built up Paradise Palms area, where you'll spot a stagecoach in a roped off location.

The hidden Banner will appear above the stagecoach when you climb on top of it, so grab it to unlock a new customisation option.

Down On The Ranch

Complete the Hunting Party Challenge for one week and you'll get this loading screen, with a not particularly hidden Battle Star floating in the background of a ranch scene. This area is found to the east of Paradise Palms, so head there.

Approach from the direction of Paradise Palms and you'll spot a red tractor parked up on the hill, which you should aim for.

The hidden Battle Stars will appear above the tractor when you approach it, so grab them and be on your way.

Want to take a break from all the challenges? Then find out how Fortnite’s spectator cam messes with your brain to make you like your enemies.