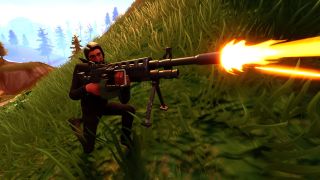 Fortnite Battle Royale's newest update is here, and if the meteor showers and updated 50v50 mode weren't enough to get you to play, maybe the promise of extra rewards will be. Epic Games is hosting a limited-time Double XP event that's live right now, and it'll run all the way through 8 am EDT / noon BST on Monday, April 23.

If you aren't already loading up the game, let's go over what this bonus event actually means for you. For starters, you earn XP at the end of every match, and how much you rack up is dependant on multiple factors: how many eliminations did you get, how long did you survive, things like that. You can also earn bonus XP by completing Challenges, which give you side objectives to complete (often over multiple games). But what is the purpose of XP, other than making a bar fill up over and over again? The answer to that question is more complicated than you might expect.

For starters, there's no such thing as a permanent level in Fortnite Battle Royale. There's only your Season Level, which - as the name implies - resets at the end of every season (we're near the end of season 3 now). Your Season Level is not to be confused with your Battle Pass Tier, which also resets every season. However the two progression systems do interact. It goes like this:

Yeah, it confuses the hell out of me, too. I wonder why Epic doesn't remove Season Levels and make the whole progression system center around your Battle Pass Tier, but hey, I'm not a game designer. In any case, bonus XP is a good thing because it helps you upgrade your Battle Pass more quickly, and your Battle Pass is full of cool rewards even if you don't upgrade to the paid version (though you probably should because it has John Wick at the end). So make sure you get plenty of matches in while the double XP event is live!

Make the most of your time during the double XP event with our Fortnite Battle Pass Challenges guide.