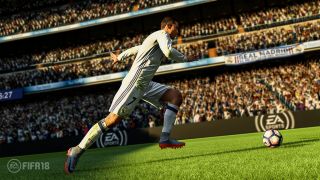 EA has announced that FIFA 18 is coming to consoles and PC on 29 September – and that its cover star will be the best player in the world right now.

For clarification purposes, I'm referring to Cristiano Ronaldo rather than Harry Maguire.

To tie in with the announcement EA has also dropped the game's first screens, as visible on this page, and confirmed that Ronny has been mo-capped for the game – meaning his unmistakeable, eccentric running style will feature.

"Data capture of Ronaldo’s acceleration, run cadence, skills, and shooting technique were all recorded to bring veracity to his likeness and personality in FIFA 18," says the publisher.

As we announced earlier, one of the special editions available to pre-order unlocks both Ronaldos in Ultimate Team. Cristiano's Brazilian namesake is the first legend revealed for this year's game, as past greats come to PS4 and PC for the first time.

We'll have much more on FIFA 18 over the weekend and early next week, as part of our comprehensive E3 coverage.