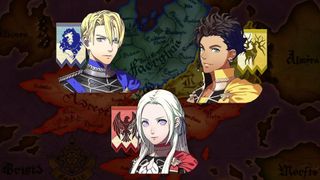 Fire Emblem: Three Houses is one pretty huge game, with hours upon hours of tactical battling action, tea parties, and loveable characters. If you’re anything like me, you’ve probably already sunk an incalculable amount of hours into the game to be the best teacher Fodlan has ever seen. Well, you can expect to sink even more time in the coming months thanks to all the additional content coming in Three Houses very own expansion pass, which Nintendo announced consists of four waves back in June. We’ve gathered together absolutely everything you need to know about all the additional content that’s on the way with the Fire Emblem: Three Houses expansion pass DLC, including when it’s releasing and what will be added.

The Fire Emblem: Three Houses expansion pass currently consists of four waves of content that will be rolling out until March 2020. If you preordered the pass you're probably already enjoying the snazzy outfit your Byleth can run around the monastery in, but there’s plenty more where that came from on the horizon.

If you’re seeking more of a challenge, you’ll be happy to know there is set to be a free update on the way that will add a lunatic difficulty setting. In an interview with Famitsu (translated by Nintendo Everything), Three Houses director Genki Yokota didn’t reveal when exactly we’ll be getting the free update, but did say we’ll have to wait just a little longer. From the sounds of it, you can expect to really test your tactical prowess in the not too distant future.

Nintendo has released a brief rundown of the content that will be heading our way, and the Famitsu interview with Yokota also revealed some more pieces of information about what to expect when the waves go live.

If you love switching up the style of Byleth and want to give your favourite students a makeover, Yokota revealed in the Famitsu interview that while currently new outfits will just be for Byleth, “eventually we plan to make it possible to change the uniforms of other students too.” More uniforms for everyone? Yes please.

In terms of additional quests and story-based content, Yokota stated that any new episodes added are purely “spin-offs that won’t affect the main story of the post-game either.” Alongside these new episodes or quests, new playable characters will also be introduced down the line. Yokota did also that these new additional are easily the most sizeable, so fans will have to wait a while - which is why the projected date for this particular content is currently set to release early next year.

We're excited to see just who the new playable characters will be and what challenges we'll face in the new quests headed our way very soon. One things for sure, Three Houses will be keeping us very busy for a long time yet. We'll keep updating this with everything we learn about the expansion pass content as news develops, so be sure to keep checking back for more.