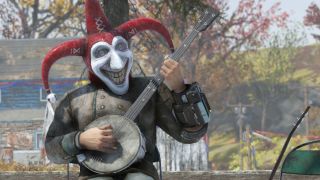 Fallout 76 is gearing up for Wild Appalachia, the first leg of its extensive plans to add all kinds of new and exciting activities to its virtual West Virginia. When Wild Appalachia goes live tomorrow, March 12, the brewing and distilling systems will let you become the bartending brewmaster you've always wanted to be - and on March 19, the weeklong Fasnacht event will kick off Fallout 76's seasonal content in spectacularly creepy fashion.

An official Inside the Vault post has given us an early look at what to expect from the coming Fasnacht festivities. Imagine, for a moment, a procession of robots marching through the streets of Helvetia, all wearing garish, 'Mardi Gras nightmare' masks. You'll be in charge of assisting said robots in the repeatable, limited-time Fasnacht Parade quest during the event, prepping for the party and acting as protection as you ward off killer creatures attracted by the festivities.

For the grand finale, you'll burn an effigy of Old Man Winter to signal the start of spring before collecting your loot, with the freaky Fasnacht masks being a chance drop rather than a guaranteed bonus. Some masks are rarer than others, so collectors will want to party up and repeat the Fasnacht Parade quest. You can also unlock some Fasnacht-themed blueprints for your C.A.M.P. as a keepsake of the limited-time event.

Hints at the Fasnacht tradition are strewn about Helvetia, like the 'Happy Fasnacht!' note explaining that the name for this German and Swiss tradition translates to 'fast night' and also has a doughnut named after it. You can also snag a horrifying Fasnacht clown mask year-round if you brave the dangers of Fort Defiance.

Bethesda also outlined some balance changes coming with Patch 7, the kickoff for Wild Appalachia. Energy and Heavy weapons are getting a boost, with buffed damage and reduced wear so they don't need to be repaired as often. C.A.M.P. budgets are also getting adjusted so you can fine-tune how to build the best Fallout 76 camp, while certain areas will be labeled as "no-build zones," possibly to prevent exploits or griefing. The map is also getting an added challenge tracker, complete with little notifications as you make progress.

Anyone who enjoys a macabre masquerade would do well to take part in Fasnacht before it goes away on March 26. You never know when you'll want a mascot-sized mask that can scare the daylights out of your fellow wanderers!

Whether you want to rule the wastes or just survive another day, our Fallout 76 tips are what you need.