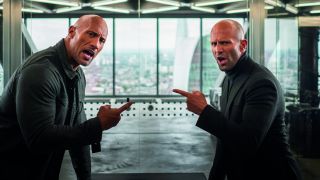 With worldwide box-office takings in excess of $5 billion, the Fast & Furious series is one of the biggest franchises out there, which is no mean feat considering there’s not a cape in sight. After eight instalments so far, the franchise is taking a detour into new territory with Fast & Furious: Hobbs & Shaw.

The upcoming spin-off with be a direct continuation from Fast & Furious 8 (The Fate of the Furious in the US), focusing on Dwayne Johnson’s Luke Hobbs and Jason Statham’s Deckard Shaw. The odd couple showed off their combustible chemistry in the last film, and Johnson’s federal agent and Statham’s British Special Forces assassin-gone-rogue are forced to team up here in a film that looks set to turn up the comedy, without scrimping on the OTT action that the series is known for.

Directed by David Leitch (Atomic Blonde, Deadpool 2), Hobbs & Shaw sees the titular duo forced to team up to take on Idris Elba’s Brixton Lore, a cyber-genetically enhanced terrorist looking to get his hands on a virus that could cause a global threat. You can see an exclusive look at the film below, courtesy of our sister publication Total Film magazine. As well as Johnson and Statham in action, and on set with Leitch, there’s also a new look at Elba brandishing a flame thrower. Check them out below now:

According to stunt-specialist-turned-director Leitch, the idea of spinning off with Hobbs and Shaw came naturally. “The chemistry between Dwayne and Jason was so well-received in [Fast & Furious] 7 and 8,” says Leitch, “that I think that it just felt right for [series screenwriter] Chris Morgan and the team to really just say, ‘These characters should have their own world. We want to know more about them. But the Fast movies can’t support all that story. So let’s give them their own lane.’”

Johnson’s Hobbs has been rumoured for spin-offs ever since he joined the franchise in Fast Five, but it was the team-up with Statham that provided the impetus for the spin-off. “It wasn’t until after Fast 8 that we realised, ‘I think we have a nice creative inroad that we can start,’” Johnson tells Total Film. “What if the spin-off was just based off of this chemistry? Can a movie sustain and support it?’ And luckily, it did.”

Statham didn’t anticipate the roadmap for his character when he first appeared in the post-credits sting of Fast & Furious 6, killing off beloved franchise favourite Han Lue (Sung Kang) in vengeance for his brother Owen (Luke Evans). “What we learned was that the test screenings for 7 and 8 went really well in our favour, in terms of what people wanted more of,” says Statham. “They wanted more of Hobbs and Shaw getting in each other’s hair – or lack of hair!”

Fast & Furious: Hobbs & Shaw opens in the UK and US (where it’s called Fast & Furious Presents: Hobbs & Shaw) on August 2, and you can read much more from Johnson, Statham, Leitch and more co-stars in the new issue of Total Film magazine, which is on sale this Friday, June 28. The issue also comes with a special supplement celebrating the Fast & Furious franchise.

If you’re a fan of Total Film, why not subscribe so that you never miss an issue, and you’ll also get exclusive subscriber-only covers like the ones below, delivered directly to your doormat before the magazine hits shelves? What are you waiting for? We’re currently running a subscription offer where you can subscribe from as little as £24.50 and you'll get two free Avengers: Endgame Funko Pop! figures, worth £25! Head to My Favourite Magazines now to take advantage of the offer. (Ts and Cs apply).