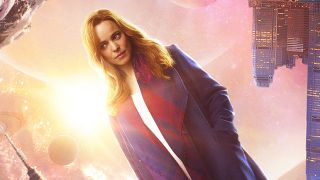 No sooner had the new Doctor Strange trailer landed, than a whole host of new posters made an appearance as well. Benedict Cumberbatch's Doctor Strange is included, but I'm more interested in the supporting cast's trippy posters.

Rachel McAdams’s Christine Palmer and Benedict Wong’s, err… Wong star in these cool new posters (along with Cumberbatch) , which you can see below.

And as if that wasn't enough, Marvel have also released some eerie motion posters on Twitter...

There are other ways to save lives. Rachel McAdams is Christine Palmer. See Marvel's #DoctorStrange in theaters November 4th! pic.twitter.com/GJipwTt09FSeptember 27, 2016

Be careful which path you travel down. See Marvel's #DoctorStrange in theaters November 4th! pic.twitter.com/hEJ18O8LN0September 27, 2016

A new IMAX poster has been released as well, offering fans an exclusive first look at the movie next month. You’ll only be able to see the first 15 minutes, but if there’s one film you want to see in IMAX 3D, I’m betting it’s this one.