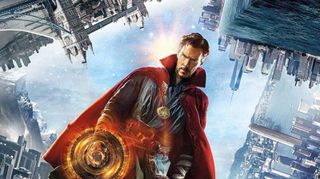 Doctor Strange director Scott Derrickson jumped onto Twitter to shoot down rumors concerning the film's previously reported runtime. According to him the film won't be 130 minutes, as was announced by Event Cinemas (see below) earlier this week. Seeing as how Derrickson's Tweet is the very definition of brief, he doesn't give us any indication on how long it actually is:

The posters for films in the Marvel Cinematic Universe can sometimes be a little disappointing, but that hasn't been the case with Doctor Strange. All the one sheets for upcoming Marvel film have been bedroom wall worthy, and the latest poster - which features a clever 'the impossibilities are endless' tagline - is no different.

Thanks to Event Cinemas, we may also have a run time for Doctor Strange. According to the site, the upcoming Marvel outing is 130 minutes long, which is pretty par for the course when it comes to the MCU (Civil War was their longest movie to date at 146 minutes). Just whether or not that 2 hours and 10 minutes amounts to a fun time at the cinema or money better spent elsewhere remains to be seen, but I'm betting on the former.